The U.S. Port Truckers Crushed by Debt Bondage - FreedomUnited.org
This website uses cookies to improve your experience. We'll assume you're ok with this, but you can opt-out if you wish.Accept Read More
Skip to content
Back to Global News 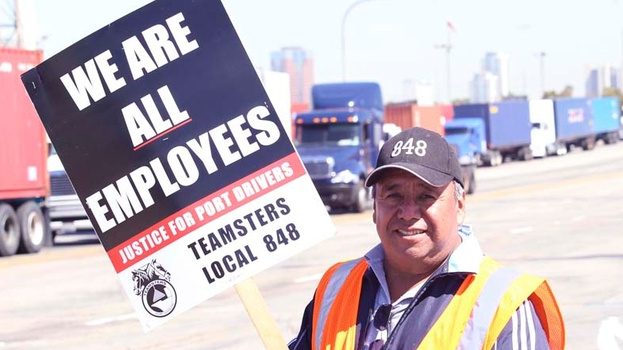 As the holiday shopping season begins, companies like Walmart, Costco, and Target are still dealing with forced labor in their supply chains. While you might think the abuses are happening in sweatshops halfway around the world, in truth they’re also right here in the U.S.

American port truckers responsible for transporting $450 billion worth of goods from ships, warehouses, and rail yards across the country are finding themselves trapped in debt bondage.

Many port truckers find themselves trapped in unethical truck leasing agreements that leave them earning as little as $3 an hour, well below the U.S. federal minimum wage of $7.25, despite working 50-plus hours per week.

While predatory lending may immediately bring to mind credit card companies and mortgage scams, in this case it’s used to create a system of debt bondage that binds drivers to abusive port trucking companies. In order to get hired, trucking companies require drivers to lease or rent a truck financed by the company and sign “independent contractor” agreements, but in reality drivers are controlled as employees.

The truck lease agreements often extend for seven years and end with a balloon payment that drivers must refinance for another three to five years. The weekly lease payments often include high interest rates and unconscionable fees and are deducted directly from drivers’ paychecks. If the truck breaks down, or the driver gets sick or misses a payment, their truck can be seized and rented to someone else. When this happens, they never again see the equity they paid into the truck.

This truck leasing structure in turn pushes many drivers to exceed the 11-hour per day driving limit, leading to higher accident rates.

Ironically, some of these global brands have invested huge sums of money to organizations abroad to monitor workers’ rights abuses in their global supply chains, but it’s quite a different case for workers in the U.S. USA Today reports that “Walmart, Target and dozens of other Fortune 500 companies have paid lobbyists up to $12.6 million to fight bills that would have held companies liable or given drivers a minimum wage and other protections that most U.S. workers already enjoy.”

In spite of this, there is some legislative progress. Congress is working on the Port Drivers’ Bill of Rights Act of 2017, which aims to establish basic standards of work for port truckers, including fair wages, protection under labor laws, and freedom from “exploitative truck lease or rental arrangements.”