US Bans Seasonal Work Visas for the Philippines - FreedomUnited.org
This website uses cookies to improve your experience. We'll assume you're ok with this, but you can opt-out if you wish.Accept Read More
Skip to content
Back to Global News 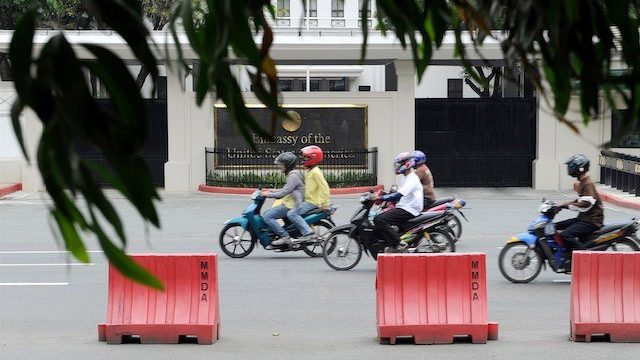 The US embassy in Manila. Photo credit: Jay Directo / AFP

US Bans Seasonal Work Visas for the Philippines

The United States Department of Homeland Security has announced that it will no longer give citizens of the Philippines temporary visas for seasonal and agricultural work.

The reason, according to DHS, is due to high visa overstay rates and concerns about human trafficking.

The visa ban will specifically affect the H-2A visa — which allows U.S. employers to hire agricultural workers — and the H-2B visa — which is often used for seasonal work.

The department said in the notice that it estimated about 40 percent of H-2B visa holders from the Philippines did not leave the country after their authorized period of stay. The U.S. Embassy in Manila also issued 40 percent of all visas for family members of human trafficking survivors, the department said, with 60 percent of those trafficked having held an H-2B visa.

The notice does not affect those who currently hold valid visas, it said, though they would be affected if they applied for an extension. In fiscal year 2017, 64 agricultural visas and 767 seasonal work visas were issued in the Philippines, according to State Department data.

In response to the DHS policy change, the Philippine Department of Foreign Affairs said the “Philippines is open to the possibility of working with the United States in addressing these issues, as it has previously done so with similar concerns involving the Filipino Community there.”

However, not everyone agrees with the visa ban. Laboni Hoq, litigation director at Asian Americans Advancing Justice, explained that, while Filipinos have been trafficked in the US, “The government needs to provide greater protections for H-2A and H-2B visa holders, not cut off access to these visas entirely.”

Aside from the Philippines, DHS also eliminated H-2A and H-2B eligibility for citizens of Ethiopia. The Dominican Republic was also removed from the list of countries eligible for seasonal work visas.