UN Reaches Global Anti-Slavery "Milestone" - FreedomUnited.org
This website uses cookies to improve your experience. We'll assume you're ok with this, but you can opt-out if you wish.Accept Read More
Skip to content
Back to Global News 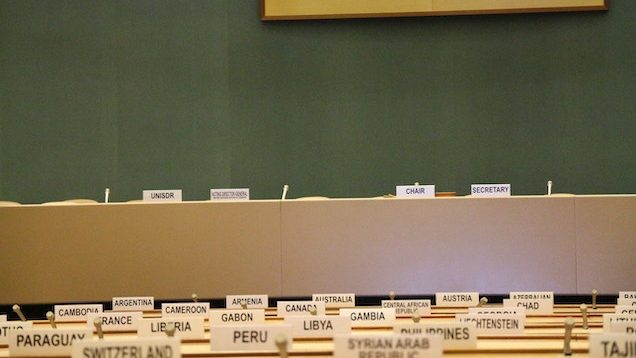 This Monday, the majority of United Nations members backed a global pact on migration that has potential to stem human trafficking around the world.

The pact has been largely criticized by right-wing European leaders, who argue it will only increase immigration, but anti-trafficking campaigners welcomed the inclusion of steps that countries should take to protect migrants from exploitation and abuse.

“This is a remarkable milestone,” said Phil Bloomer executive director of the London-based Business and Human Rights Resource Centre (BHRRC).

The U.N. deal commits signatories to ensure migrant workers are recruited in a fair and ethical way, and suggests a number of possible actions, including banning recruitment fees and boosting police controls.

Migrants are considered particularly vulnerable as they often incur high debts to fund their journeys and do not have the right papers to work upon arriving in a new country.

Many end up toiling long hours for little pay in the supply chains of global companies producing anything from food to laptops to clothing, said Bloomer.

“That has essentially been allowed because of the lack of coordination between states around the issue of migration that allowed traffickers to thrive,” he told the Thomson Reuters Foundation by phone.

“The fact that 164 nations have come together to start to commit collectively to tighten legislation to prevent trafficking is fundamentally important.”

Importantly, the pact also calls on countries to recognize the difference between human trafficking and human smuggling, as well as for countries to provide trafficking victims with better protections and assistance.

Still, as Nicola Jones from the Overseas Development Institute (ODI) pointed out, the agreement is non-binding.

“Details at the end on follow up and implementation are quite weak,” she said. “What’s missing is really some kind of enforceability. We have to have some clear milestones and targets that have to be monitored”.

On top of this, some 30 countries did not join the 164 countries that ratified the pact at a ceremony in Marrakesh.

Austria, Chile, and Brazil also objected, saying respectively that the pact was not clear on legal vs illegal migration, that migration was not a human right, and that nations should set their own policies.