Thailand Pressured to Resolve Slave Labor - FreedomUnited.org
This website uses cookies to improve your experience. We'll assume you're ok with this, but you can opt-out if you wish.Accept Read More
Skip to content
Back to Global News 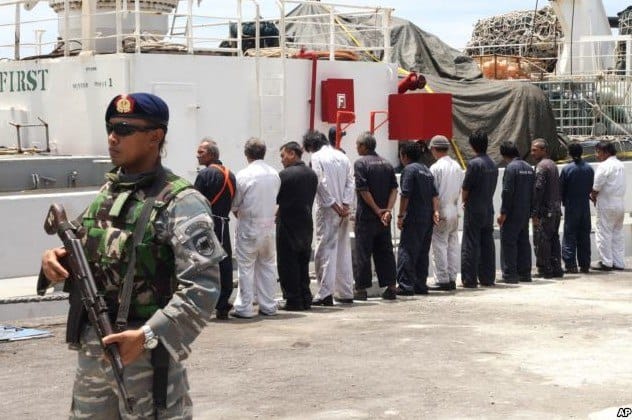 And it is seen as a positive move that the Thai Government is taking steps to boost its rating in the U.S.’s annual Trafficking in Persons (TIP) report due later this year.  As the world’s third biggest seafood exporter, it has been under constant pressure to make reforms in its multimillion-dollar seafood business else sanctions will be imposed by the US and the EU.  Consequently, a European Union delegation recently granted Thailand a six month reprieve from sanctions to further solve the problems of illegal, unreported and unregulated (IUU) fishing.

This week, U.S. President Obama signed into legislation a law banning all U.S. imports of products made or caught by slave labor.  This move closed a long time legal loophole that existed since 1930.

Investigations and subsequent reports have led to measures by the Thai government to combat abuses, including legislation and crackdowns on fishing vessels and factories hiring migrant labor.

In Phangna, Myanmar, the national Htoo Chit, president of a foundation assisting migrant workers, believes there has been progress: “I’ve always said compared to the previous time, the current government is the most active and most interested [in] working for these human rights issue[s] and [human] trafficking, especially in the seafood industry. They try to collaborate with NGOs [on-government organizations] like us. Since last year, the Thai government has tried to resolve these problems.”

Major seafood industry exporters, including Thai Union Frozen Products, with annual sales of $3.5 billion, were forced to cut ties with suppliers linked to slave labor. Panitan Wattanayagorn, an advisor to the Thai Deputy Prime Minister, Prawit Wongsuwan, who held talks with the European Union delegation, said the Thai Government is committed to implementing policies and laws affecting the seafood industry.  “There is a policy of zero tolerance in these areas. Trafficking is a very complicated issue.”