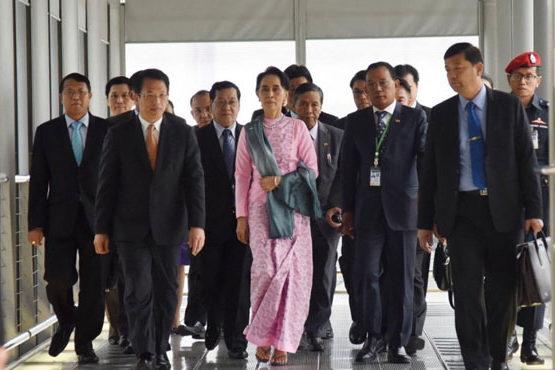 Thai officials, more than 20 in all and including a governor and chief prosecutor. were transferred from their posts just days after Myanmar’s leader Suu Kyi visited the seafood manufacturing hub…

And now activists are calling for more transparency about why it happened in this province that is so notorious for rights abuses among refugees.

Thai Prime Minister Prayuth Chan-ocha signed the transfer orders Saturday that shifted the 23 officials in central Samut Sakhon province to inactive posts with immediate effect. No official reason was given for the transfer, but the province has longstanding problems with corruption and has been subject to accusations of forced labor. Samut Sakhon is home to a large Myanmar migrant population that services the bulk of Thai fishing fleets in the province.

Andy Hall, a well-known activist from the Migrant Workers Rights Network emphasized the need for more transparency over the transfers and how it might bring accountability. ” The visit by Suu Kyi to meet with the workers was a disaster with a majority of migrant workers being kept out of the meetings. It was very poorly done by the officials. There are also longstanding issues of corruption here.”

For many years, international organizations have made accusations of child labor, forced labor, discrimination, trafficking in persons and exploitative working conditions at fish preparing and packing factories in Samut Sakhon.

Many overseas markets of the United States, Europe, and Asia have called for a boycott of Thailand since an investigation found that shrimp producers had forced its laborers to work long hours for little or no pay.

Thursday, police and military officers failed to stop thousands of Myanmar migrant workers who were breaking through security gates near a seafood market in the city of Mahachai.  They were trying to get nearer to Minister Suu Kyi whose visit to Thailand was believed a victory for the four million-Myanmar migrant workers.

To read more about the Thai officials who were removed from their posts, click on the link below.