Telangana Initiating Plans Against Trafficking - FreedomUnited.org
This website uses cookies to improve your experience. We'll assume you're ok with this, but you can opt-out if you wish.Accept Read More
Skip to content
Back to Global News 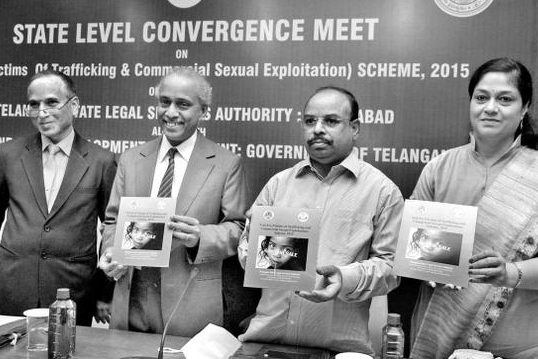 Telangana, one of India’s 29 states, is implementing some plans prescribed by the  National Legal Services Authority (NALSA) to provide legal aid and assistance to  victims.  NALSA first started in 2015, but just this year is drafting these minimal plans of action in Telangana….

On Saturday, they held the first academic meeting to discuss implementation.

The NALSA had asked the State to identify districts where each of the schemes was to be implemented, constitute panel of lawyers who would comply with the schemes and also suggest other schemes which could be implemented for the benefit of vulnerable sections. Inaugurating the meet, Justice V. Ramasubramanian of the Hyderabad High Court and Executive Chairman of the T.S Legal Services Authority said, “Society should be able to cleanse itself of prevalent myths about victims of trafficking. The schemes will ensure rescue and rehabilitation of such victims”. Participants of the meeting included metropolitan magistrates of Hyderabad and Ranga Reddy, special judges of POCSO (Protection of Children from Sexual Offences Act, 2012) and panel of lawyers. The first academic meeting was held by TSLSA in collaboration with the department of Women and Child Development.

M. Jagadeshwar is Secretary of Women and Child Development.  He said the department is honing in on getting non-governmental organisations and grassroots volunteers to help with the schemes.  Already, the State government has improved assistance for victims of trafficking from Rs. 5,000 to Rs. 20,000, he added.

So far, the NALSA has launched seven schemes.  One that was launched earlier is aimed at victims of trafficking and commercial sexual exploitation. NALSA also asked the State to start awareness, training, and sensitisation programmes in each of the districts. These programs are not just for victims, but also for their families and the public.

To read the entire article about Telangana, click on the link below.