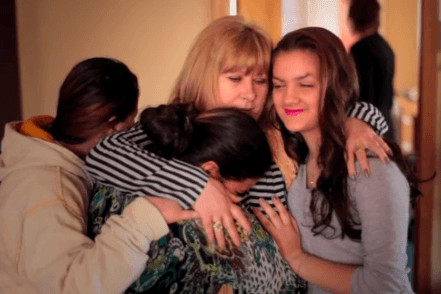 A Romanian psychologist, Iana Matei is not just courageous, but she is angry “at the people who do this, who beat up a young girl, rape her”…

It’s a country with a dark reputation for sex trade.  But Iana took a hard stand.  For the last 18 years, she has provided shelter, emotional care, education, and hope to women and girls who have endured and survived sex trafficking.  “I’m also angry at society for turning a blind eye.”  The website of the organization she started, Reaching Out Romania, has assisted more than 470 girls and women. Not only does the organization offer shelter and services, it offers a community for the survivors.

Matei’s son, Stephan says in a video, “Reaching Out Romania is like a family. My mom looks into their lives and sees hope — she shows the girls there’s hope.”

It isn’t unusual for the girls, some as young as 14 or 15-years-old, to come from dysfunctional homes where they have already been abused in various ways.

Matei provides them with long-term care, helping them return to school, or if they are older, to find a job, according to the website.Many of the girls in Matei’s shelter are brought by police or child protection services, but sometimes Matei takes them from pimps and traffickers herself.

“It’s dangerous[rescuing them] because anything can happen. The traffickers don’t expect you to challenge them. When I kidnap one of their girls, they’re in shock. Some of the girls think I am a madam initially. They’re so used to people exploiting them. They can’t believe someone would want to help them.”

According to the UN, extreme poverty is a major driver behind trafficking. Many families around the world sell their own children in order to get money to survive.

To read this entire article about this Romanian psychologist, click on the link below.