From New York to Paris, protests erupt against Uyghur forced labor - FreedomUnited.org
This website uses cookies to improve your experience. We'll assume you're ok with this, but you can opt-out if you wish.Accept Read More
Skip to content
Back to Global News 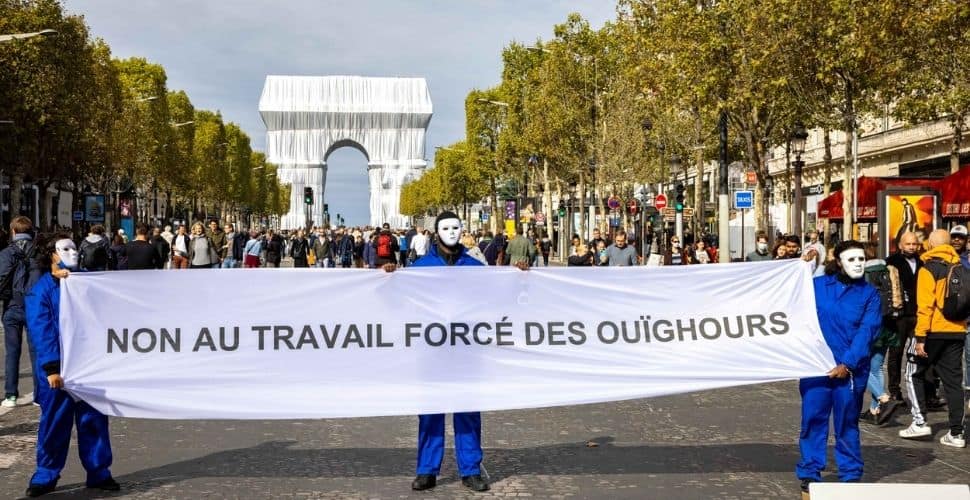 On Saturday, October 2, protests simultaneously broke out in New York and Paris at Zara and Apple stores. Though organized separately by different groups, both shared a common goal: to raise a voice against Uyghur forced labor.

While persons were demonstrating in front of Zara’s flagship store at the Champs-Elysees in Paris, a group of protestors gathered in front of an Apple store on the Upper West Side in New York. Another separate protest occurred later in the day in Paris involving a march of thousands of people from Bastille Square to Place de la Republique calling for a boycott of the Beijing 2022 Olympics and for the European Union to cancel all deals with China.

In New York, they chanted, “What do we want? Justice for Uyghurs. When do we want it? Now!” In Paris, a giant banner was unfurled before the Arc de Triomphe proclaiming “Non au travail forcé des Ouïghours” (No to Uyghur forced labor).

While Apple has continued to state its zero tolerance policy for forced labor, it has also continued to partner with suppliers operating in the Uyghur Region or linked to third parties participating in the forced labor system in China. What’s more, Apple was caught lobbying against the Uyghur Forced Labor Prevention Act. For these reasons and more, Freedom United launched an action for supporters to write to Apple CEO, Tim Cook, a few months ago. This recent protest is a clear indication that the public is aware that Apple has yet to make a demonstrable break with Uyghur forced labor in its supply chains.

Freedom United also has a Zara targeted action due to the popular brand’s failure to sign the Call to Action of the Coalition to End Forced Labour in the Uyghur Region. We applaud the efforts of our coalition partners, SumofUs and World Uyghur Congress for continuing the protests that began in New York last month.

The Times of India reports,

Further, many speakers denounced the complicity of multinational fashion companies like Zara, Hugo Boss and Uniqlo, who continued to buy products produced by forced Uyghur labour…

Assal Khamraeva -Aubert, the World Uyghur Congress’s representative in France and co-organiser of the event called on the French government to consider halting imports of products from Xinjiang that were produced using forced Uyghur labour. She added that the WUC hoped that apart from the international community recognising the Uyghur genocide, which would be a ‘symbolic victory’ it was also important to have an impact at the “economic level’.

More than 80,000 have now added their name to Freedom United’s petition calling for an end to the Chinese government’s forced labor system.

Why is there no mention of the Christian minority among these groups who are also persecuted by their own people?