Private Prisons Hit with Class Action Lawsuit - FreedomUnited.org
This website uses cookies to improve your experience. We'll assume you're ok with this, but you can opt-out if you wish.Accept Read More
Skip to content
Back to Global News 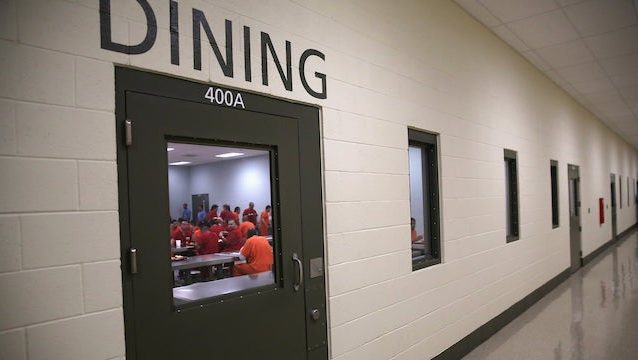 Two of the United States’ largest private prison companies, CoreCivic and Geo Group, have been hit with yet another class action lawsuit, this time from detainees held in a correctional center in New Mexico.

Incredibly, some of the men who were forced to work inside the prisons for just $0.50 or less an hour include African refugees from Cameroon who have now been granted political asylum in the US.

It’s a common occurrence for migrants  — including asylum seekers — to be held in American immigration detention centers and made to fill prison jobs, cooking, cleaning, and doing laundry for just $1 a day.

In a recently filed class-action lawsuit, Abi, Ndambi and one other man who fled Cameroon in 2017, brought wage theft claims against CoreCivic’s Cibola county correctional center in New Mexico.

“The fact that the company is able to obtain the labor it needs to function, for the facility to function, at vastly below market rates is part of its business model,” Joseph Sellers, an attorney at Cohen Milstein who is representing the plaintiffs, told the Guardian.

Both CoreCivic and Geo Group have said the pay is compliant with a voluntary work program mandated by the government, but attorneys said the labor is not voluntary because it is needed to pay for items such as toothpaste or to make phone calls to loved ones.

“I wouldn’t call it voluntarily,” Sellers said. “They do this work because they need the income, which is meager, certainly, to help pay for sundries and various things like toothpaste they may need while they are confined and don’t otherwise have.”

This isn’t the first time the two private prison companies have been sued. In 2014, detainees sued Geo Group for wage theft. In April of this year, a class action lawsuit was brought against CoreCivic for forced labor at one of their Georgia facilities. Most recently, in September the state of Washington filed suit against Geo Group for paying detainees just $1 a day.

Both companies maintain that work is voluntary and legal.

“The wage rates associated with this federally-mandated program are stipulated under long-established guidelines set by the United States Congress,” explained Pablo Paez, a Geo Group spokesman.

Still, this isn’t just about exploitation of detainees; it’s about the effects on the surrounding labor market.

“The purpose of these laws isn’t simply to protect the earning rights of the people who are being exploited, but also the average wages of people in a particular community,” she said.

“When you are able to hire people for a $1 a day or less, you undercut the employment opportunities for everybody else.”

These private prisons encourage law enforcement to send people to these for profit prisons, police arrest people for minor violations, they are found guilty for small violations where those found guilty should be either fined or go community service. The big problem also is these inmates at private prisons have zero rehabilitation, because the prisons want return offenders to make money.