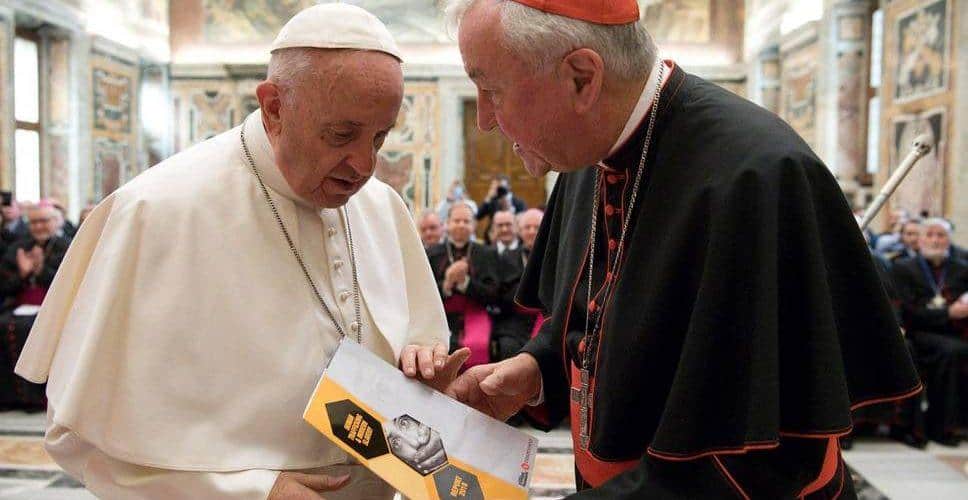 Pope Francis has been presented the Evening Standard’s “Slaves on Our Streets” report at the Vatican. Archbishop of Westminster, Cardinal Vincent Nichols, handed him the report after chairing a conference of the Santa Maria Group, which brings together police and clergy to collaborate on how to address human trafficking and assist survivors.

“We ask you, Holy Father, to continue to call governments to a truly humane response to the victims and survivors of human trafficking in the support and protection they provide; to urge financial and business institutions to do all they can to eliminate slavery and its profits from their transactions; and to encourage all people of good will to become more alert to the presence of slave labour,” said Cardinal Vincent Nichols.

Pope Francis has called modern slavery a “wound on the body of contemporary society”. As he thanked the group for its commitment, he talked of the need to raise public awareness.

“Initiatives to combat human trafficking, while concretely aimed at dismantling criminal structures, must increasingly consider broader issues associated with the responsible use of technology and the communications media,” he said.

The Pope added that “The Church is grateful for every effort made to bring the balm of God’s mercy to the suffering” and that modern slavery was “far more widespread previously imagined.”

Dick praised the Evening Standard’s consistent reporting on modern slavery, calling the report very powerful. “To have something that is vivid, authentic and authoritative over a period of weeks and months, not just the odd article, I think has raised consciousness hugely,” she said.