The Philippines Ambassador Spoke Out. So Kuwait Expelled Him. - FreedomUnited.org
This website uses cookies to improve your experience. We'll assume you're ok with this, but you can opt-out if you wish.Accept Read More
Skip to content
Back to Global News 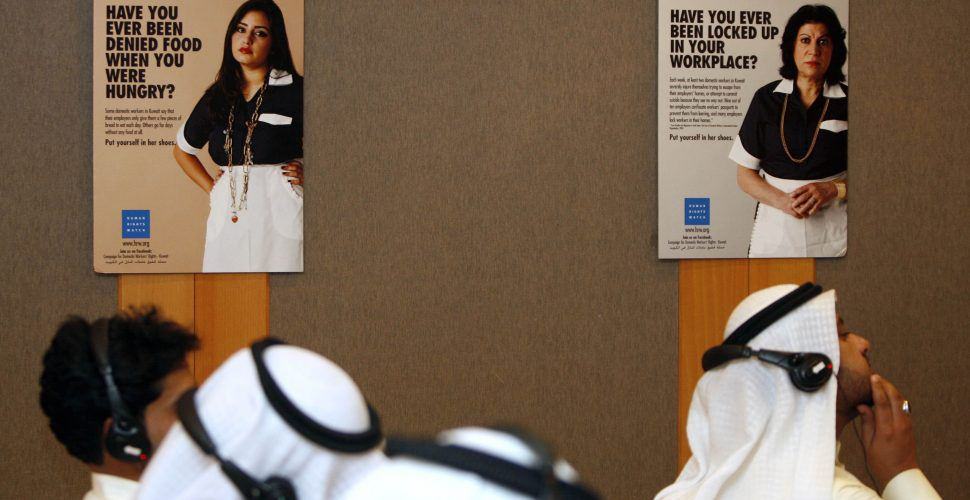 The Philippines Ambassador Spoke Out. So Kuwait Expelled Him.

Kuwait has expelled the Philippines ambassador and recalled its own envoy from the Philippines as the diplomatic rift between the two countries over the abuse of Filipina domestic workers widens.

The oil-rich Gulf nation has long been dependant on the 260,000 migrant Filipino workers in the country, but reports of severe abuse and the horrifying murder of a Filipina whose body was stuffed into a freezer by her employers prompted a migration ban by the Philippine government.

The two nations had hoped to negotiate an end to this ban, but this week the arrests of two Filipinos associated with the embassy — who allegedly convinced abused domestic workers to flee their employers’ homes — and comments from Philippines Ambassador Renato Villa proved too much for Kuwait to bear.

TIME reports that Villa is likely being expelled for saying the embassy would step in to help domestic workers when Kuwaiti authorities do not:

He offered a public apology Tuesday over those remarks, as did the Philippines foreign minister over the comments. Two Filipinos associated with the embassy also were arrested this weekend for allegedly encouraging maids to flee their employers’ homes, Kuwaiti police said.

Prior to this latest development, Philippine officials had been negotiating better protections for its workers in Kuwait, including the right for domestic workers to hold onto their passports and cellphones — two things many Kuwaiti employers are known to seize.

Some observers believe the two sides will eventually reach an agreement, especially as the Muslim holy fasting month of Ramadan begins next month. Kuwaiti employers often rely on their Filipina domestic workers during the fasting period.

Kristin Diwan, an expert on Kuwait and a senior resident scholar at the Arab Gulf States Institute in Washington says this case is a “clash of rising nationalisms” — “the tough-guy Philippine president defending his people abroad and Kuwait resenting the insolence of a subordinate.”

“The expulsion of the ambassador is a hardball tactic on the part of Kuwait, which hopefully will lead to a negotiated settlement. Both countries ultimately benefit from this relationship,” she said.

It is unbearable how the world deals with women from the Philippines when they get into a slave relationship. The murder of a woman who has become known will not be the only murder. It is unbearable and obscene, as an oil-wealthed nation calls the human rights of the Philippines “subordinate”. Wealth confuses the mind. But it’s dangerous what’s going on in those heads.

We stand for our president as he said, ‘we don’t send slaves but humans beings’..how horrific Kuwaiti employers exploited Filipino maids using their power through ‘kefala’, took their passports, force to work unlimited time and work with other households of their relatives and friends, abused physically, raped, and even killed..it’s time to stop sending domestic helpers to Kuwait.

It is time the world isolates countries like these. Let they drink their oil themselves.

Sadly slave labour like this is present in Europe / uk where domestic help are treated like slaves, I agree Middle East are the worst

I have worked in the UAE and Saudi Arabia (KSA) in mid 1990s and early 2000s as the regional representative of my organization. I am convinced that too many domestic workers, irrespective of their origins, are subjected to inhuman conditions by their employers.
I wish and pray that all ambassadors, whose country folks work as domestic workers in UAE, KSA, Kuwait, Doha, Bahrain and Oman, should become proactive in helping their poor country folks. I urge these ambassadors work as a group.

I was in Dubai to train upper-level admin assistants of Managers of 4 oil companies. I stayed in a 5-star hotel; ate my meals there. Sad Filipino wait staff said they lived in dormitories, bussed to work, locked in; passports taken, could not go home, talk to family for 3 years till debt of job was paid. I gave 1 nice boy like my son my card. 6 months later got email from Philippines; was raped by his employer, had AIDS, dying. I called Ambassador, staff checked. It’s true. He died that week.

The culture of abuse against migrant workers is an International scandal.
Each case must be seen individually.
The worst countries are easily named and shamed. But the people doing the exploiting start with recruiters in the workers home countries.
The Traffickers..
Each country has a duty to expose Slave Labour and abuse of their workers and a duty to inform their people of the reality of working in places where life is cheap and human rights either don’t exist or are ignored.