Outrage over Moroccan Maids 'Sold' on Saudi Twitter - FreedomUnited.org
This website uses cookies to improve your experience. We'll assume you're ok with this, but you can opt-out if you wish.Accept Read More
Skip to content
Back to Global News 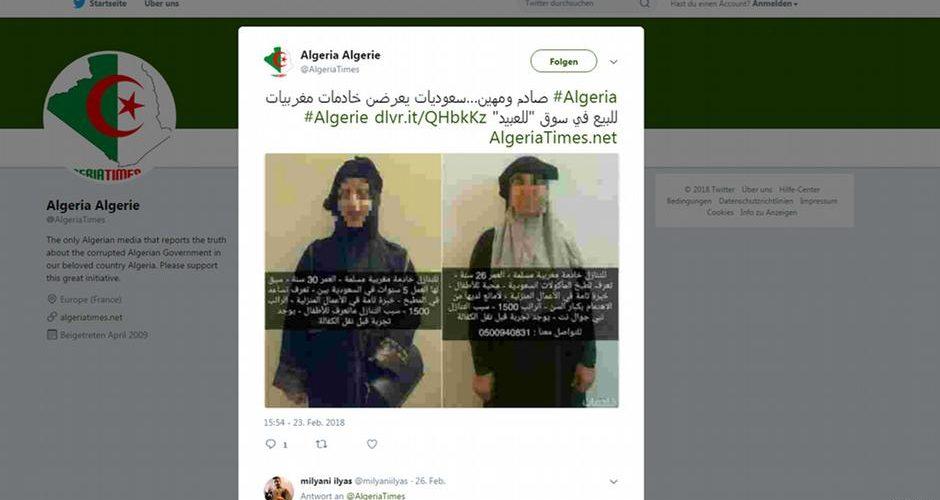 Two Moroccan women have been advertised on Saudi Arabian Twitter, sold as domestic workers for lump sums of cash. The post has sparked outrage among anti-slavery and women’s rights advocates.

The case is clear-cut: “This is an example of slavery,” Yasmine Ajoutat, a Moroccan blogger on women’s issues and human rights told DW.  She explained that foreign women working as housemaids in Saudi Arabia are severely restricted in what they may do. For example, many Saudis do not allow their maids to own a cell phone to communicate with their families.

In one ad the seller complains that they are selling a Moroccan woman as a housemaid due to “her ambition to obtain a mobile phone.” In another Twitter post, a passport of a Moroccan woman had been taken away and used to advertise the maid for sale.

Saudi Arabia began allowing Morrocans to be domestic workers in the country since 2011, though all domestic workers are subject to the kafala system, which ties a worker’s visa to their employer. This scheme has long been criticized as it makes it extremely difficult for domestic workers to escape abusive situations where employers seize their passports, withhold payment, and even deny them the ability to leave Saudi Arabia.

DW also notes that some Saudi female employers have been charged with violence against Moroccan domestic workers out of fear that they would seduce their husbands.

Abdul Aziz al-Khamis, a Saudi journalist, said he believed this case of Moroccan women being offered for sale online was “contrary to both Saudi and International law” and would be resolved by the government. The Saudi Ministry of Information technically prohibits ads like this on public forums as they are personally humiliating.

If the story is true, the perpetrators will be taken before the Saudi authorities,” he said.

This is an absolutely brazen example of human slavery. The mere fact that these women’s employer felt that advertising them like property was perfectly fine must make one wonder if this attitude towards servants is prolific and accepted within Saudi society. Furthermore the tying of a worker to the employer named (and only those named) on their work visa will inevitably lead to the workers right being withheld and in some cases it will allow abuse to go unpunished.

Sometimes it is very hard to believe that people are being sold in this modern world. It is disgusting.

You may find several smuggled Syrian females in different regions of Saudi Arabia. In cover of polygamy, such activities are carried out.

I wondered what it took to get people outraged at something that happens in a Muslim controlled country. There are over 20 million slaves in the ME countries alone then look at Africa where such things are epidemic and it is because slaves are allowed in Islam. The fact that it is no longer acceptable in a civilised country is beside the point, no-one ever said that these countries were.

Slaves are allowed in Christianity too. In fact, the Bible was used to justify slavery in the US when it was legal. Don’t try to bring Islam into this, this is a major problem all over the world and is not because of Islam. Look at this map of the countries where slavery is the highest.:

I agree with you Michelle human beings exploit each other under many false guises and religion unfortunately is one of the most widely used. May we be forgiven as a race and become better than this.

I know of many girls to be abused in Saudi Arabia. I think it’s part of their culture. Of course it is not all of them. I know of girls who have been happy too.