Men, Boys Comprise Six in 10 of Britain's Victims - FreedomUnited.org
This website uses cookies to improve your experience. We'll assume you're ok with this, but you can opt-out if you wish.Accept Read More
Skip to content
Back to Global News 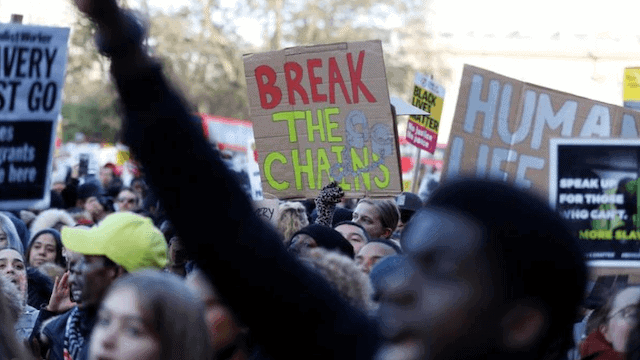 The number of suspected victims of modern slavery in Britain surged last year, rising to more than 7,000. That marks more than a third of an increase from 2017, sparking concerns that the country is not doing enough to tackle the crime and support victims.

Data from the National Crime Agency analyzed by Thomson Reuters Foundation revealed that six in 10 victims are men and boys.

Labor exploitation remains the top form of modern slavery, and most victims come from Britain, Albania, and Vietnam. Children are estimated to make up 44% of victims.

In addition, the number of British child victims referred to the government for support more than doubled to 1,419. British police say the expansion of the ‘county lines’ drug trade — where children are forced to ferry drugs between cities and rural areas of Britain —has contributed to the rise in trafficking victims.

People who say they have been enslaved can get counselling, housing, legal aid, and allowance payments during a recovery period under the government’s National Referral Mechanism (NRM) – the scheme whereby victims are identified and given support.

Yet activists say the system is beset by a lack of standards over care and oversight, and long delays in decision making that leave many victims in limbo – and drive some back into slavery.

“There is a concern with the rise in demand for support over whether needs are being properly met,” said Kate Roberts, head of office at the Human Trafficking Foundation. “We need to know that the quality of care is not being negatively affected.”

“The government needs to ensure it is not just identifying people, but providing proper support. We need reforms now.”

A spokesman for the Home Office said that they were committed to reforming the NRM, explaining that “We have more than doubled the number of caseworkers to reduce outstanding cases, and are introducing measures to ensure quicker, more effective decision-making.”

However, activists say reforms have been far too slow, with at least 2,200 people waiting for more than a year to see if the government will recognize them as a victim of modern slavery.