Malaysia To Probe Cover Up of Rohingya Mass Graves - FreedomUnited.org
This website uses cookies to improve your experience. We'll assume you're ok with this, but you can opt-out if you wish.Accept Read More
Skip to content
Back to Global News 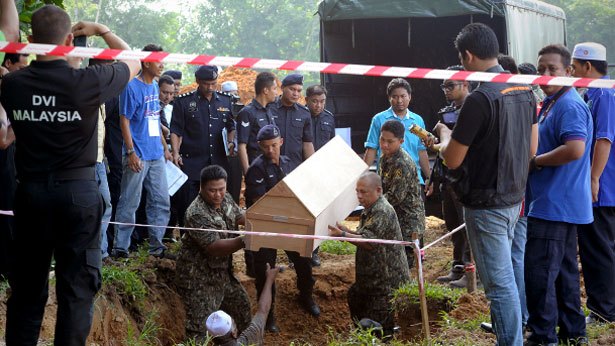 Malaysia To Probe Cover Up of Rohingya Mass Graves

Malaysia says it will investigate a potential police cover up of the mass graves of Rohingya Muslims from Myanmar and Bangladeshi migrants who died in human trafficking camps along the Thailand-Malaysia border. The move comes in response to an expose published by the New Straits Times (NST), which alleged that Malaysian authorities had known about the graves and trafficking camps close to Wang Kelian, a town near the Thai border in the northern state of Perlis, several months before the police went public with the discovery.

In its report, NST claimed it found a “massive, coordinated cover-up” by Malaysian law enforcement authorities near the border, saying a team of investigative journalists had pored over scores of official documents, checked reams of reports and sought out witnesses during the past two years.

“One shocking discovery was that the authorities, particularly the Perlis police, knew the existence of these jungle camps in Wang Kelian in early January 2015, but had allegedly chosen not to do anything about them until half a year later,” the report said.

According to the newspaper, about 150 bodies were found at the jungle camps. The victims were mostly Rohingya Muslims from Myanmar’s Rakhine state, it said.

The New Straits Times further charged Malaysian police with working together with the traffickers to clean up the crime scene.

Malaysia has only prosecuted four people in connection to the Wang Kelian case. Twelve police officers had also been arrested but were later released due to lack of evidence.

Glorene Das from Malaysia anti-trafficking NGO Tenaganita added, “Human trafficking by criminals is a common phenomenon all over the world, but it is extremely agonizing when law enforcement agencies are found to be entrenched in the criminal activities.”