Why You Should Know Ai-jen Poo - Meryl Streep’s ‘Date’ - FreedomUnited.org
This website uses cookies to improve your experience. We'll assume you're ok with this, but you can opt-out if you wish.Accept Read More
Skip to content
Back to Global News 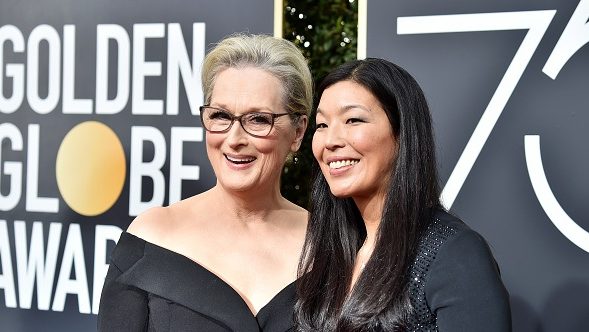 Why You Should Know Ai-jen Poo -- Meryl Streep’s ‘Date’

If you watched the Golden Globes, you likely saw Meryl Streep with her red carpet date, Ai-jen Poo, the director of the National Domestic Workers Alliance (NDWA). Streep was one of eight Hollywood actresses who brought a leading women’s rights activist to the ceremony.

Poo, as the director of NDWA, is leading the fight against domestic slavery in the United States by advocating for women who “labor in our homes every day as nannies, personal attendants, caregivers to the elderly, and housecleaners.” Domestic workers, she explains, are some of the most invisible and under-valued laborers in the economy, and surprisingly few guidelines or legal standards exist with respect to domestic workers’ rights.

In her interview with Refinery29, Poo describes how her personal life inspired her to do this work:

I grew up in an immigrant household, and my grandparents moved in with my family when I was pretty young. They played a really strong role in raising me and my sister, which taught us so much about valuing family and respecting our elders. Embedded in both of those values is the importance of care and care giving — knowing how to recognize the people who support you. When I was a young adult, my grandfather started to lose his sight and became much frailer as he grew older, but my father was unable to care for him at home, so we ended up having to place him in a nursing home against his wishes.

The ability to have a strong and prepared care workforce that is ready to support us has become an obsession of mine, because we see it from both ends — the women who do the difficult, rewarding work and who get very little in return, and the elders who cared for us and deserve dignity and dedication as they age.

She adds that immigrant domestic workers in the United States are particularly vulnerable in this current political environment as many are undocumented. In fact, she notes “When people think about where undocumented people are working in our economy, they usually think about agriculture. But, actually, the largest concentration of undocumented laborers are found in the domestic work industry.”

If the United States is to ensure that proper care exists for everyone who needs it — whether child or elder — Poo says it is hard to imagine that reality without an immigrant workforce.

Meryl Streep is a joke. Anyone who so vehemently supported the murderous warmonger Hillary Clinton is either insane, completely lacking in empathy or simply cynically indifferent to mass murder, our imperial military adventures or the dozens and dozens of suicides of our veterans both young and old. However, considering that one her Washington establishment pals is the complicit murderer of innocents, Madeleine Albright, perhaps we shouldn’t be surprised. Reprehensible. Hypocrite.