Jail for Traffickers in Fishing Industry - FreedomUnited.org
This website uses cookies to improve your experience. We'll assume you're ok with this, but you can opt-out if you wish.Accept Read More
Skip to content
Back to Global News 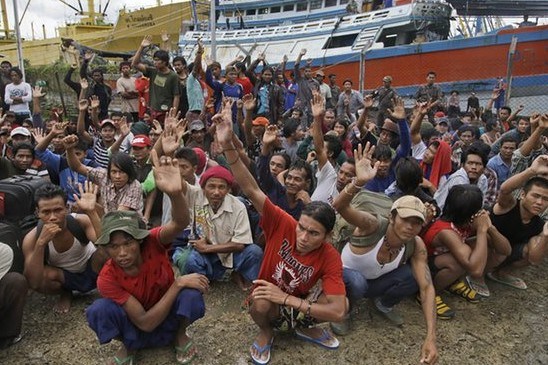 Jail for Traffickers in Fishing Industry

The arrests were made back in May of 2015 in the Indonesian village of Benjina.  Each man was tried individually.  The judges ordered them to pay about $12,250 each and to serve jail time.  The captains will pay a total of $67,800 to their crew.

Edi Toto Purba who led the panel, said, “They all have been proven guilty of violating the anti-human trafficking law. They deserve the jail sentences as well as the fine.”  There were 13 fishermen from Burma who testified in the cases and said they were tortured, told to work long, long hours, without pay, and even locked in cells.

Some workers were not happy with the sentences and fines.  One said, “They should be sentenced more because they tortured many fishermen for years. It’s not fair for us. They will never pay us compensation because they know how to get away from punishment.  I will never forget what they did to many people over many years. Three years imprisonment is too easy for them.”

Thousands of migrant fishermen who were primarily from Myanmar, Cambodia and Laos were enslaved in Indonesia and treated brutally for years or in some cases for decades. The Associated Press found men trapped in a cage and others shouting for help.

More than 2,000 men were freed and sent home in 2015 as a result of the investigation, which traced slave-caught seafood to some of the most well-known US grocery stores and pet food brands. In the US, congressional hearings have been held, legislation has been changed, more than a dozen people arrested and multi-million dollar seafood cargo ships seized.