Home Office rejects 12-month support for trafficking victims - FreedomUnited.org
This website uses cookies to improve your experience. We'll assume you're ok with this, but you can opt-out if you wish.Accept Read More
Skip to content
Back to Global News 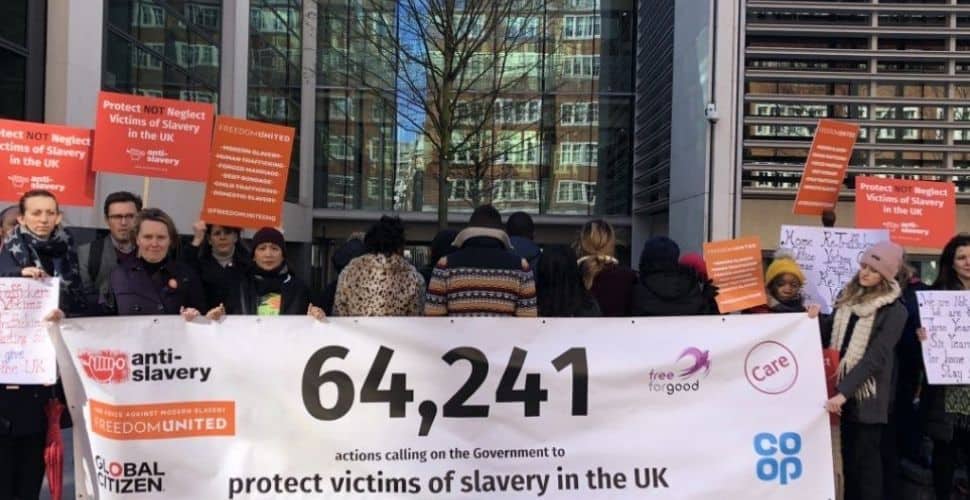 Despite repeated calls from trafficking survivors, activists, and anti-slavery organizations to expand support for survivors of modern slavery, the U.K. Home Office has voiced its opposition to guaranteeing 12 months of support under the U.K. Modern Slavery Victim Support Bill.

The bill, supported by Freedom United, calls for trafficking victims of all nationalities to receive a minimum of 12 months’ access to safe housing, support and protection from immigration detention.

Victoria Atkins, the minister for safeguarding, wrote to Maya Esslemont, the director of After Exploitation, expressing her opposition to the bill, stating that she “does not support the … bill in its current form. The government does not agree that victims should automatically be granted leave to remain for 12 months. The government does not have an absolute exclusion from detention for any particular group.”

She added that the government carries out “adults at risk” assessments for vulnerable detained victims of trafficking and that their detention is approved by senior Home Office officials.

The private member’s bill has been tabled by Ian McColl, a Conservative life peer, and co-sponsored by Iain Duncan Smith, the former Conservative party leader and former work and pensions secretary.

The private member’s bill, along with a letter last October signed by dozens of NGOs, calls for increased protection for trafficking victims, particularly those at risk of deportation because they are not U.K. nationals.

If trafficking victims are deported, not only are their lives potentially put at risk but valuable intelligence about who trafficked them could be lost.

According to Home Office data obtained by After Exploitation through freedom of information requests, 1,256 potential trafficking victims were detained in 2019.

Esselmont refuted the Home Office’s argument, decrying the prioritization of detention and deportation over policies that will support trafficking survivors.

“In order to be recognised as a survivor, victims are first referred by ‘first responders’ and then assessed via a two-stage process sometimes lasting years. It is insulting that even where victims undergo the gruelling steps requested of them, the government cannot meet survivors halfway with incredibly basic and short-term protection,” she said.

“The current system of support and recognition is unsustainable and makes it difficult for non-U.K. survivors to report crime due to the threat of deportation or detention. Equally, U.K. survivors cannot be confident about the length of support, such as access to safe housing, they will receive if they come forward. Until the government creates a culture of safety for those exploited, it is impossible to win the trust of survivors who are rightfully fearful of seeking help.”

Take action today by calling on the U.K. to guarantee support for survivors. Sign the petition here.