Girls Sold for Sex in Indiana - FreedomUnited.org
Skip to content
Back to Global News 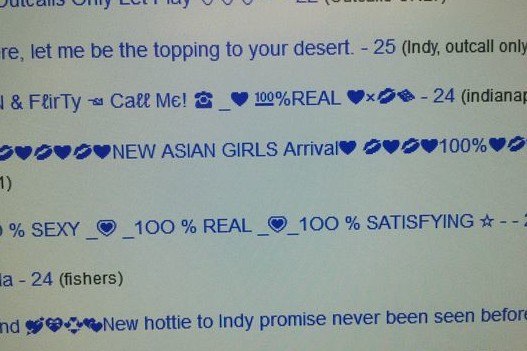 Girls Sold for Sex in Indiana

Girls sold for sex in Indiana; some as young as 15. A Marion County’s juvenile judge: ” This is evil.”

One was a 8th grade girl who had a bipolar disorder.  She had run away from her east side home and met a couple who lured her to a hotel where they photographed her and began running ads promoting her for sex in the Escorts column of the paper.  Nearly 11 men came each night and forced her into submitting to them, night after night for about a week.  Eventually, her mother found her and she was rescued.  The couple are awaiting trial.

Rape is forcing someone to have sex against their will…and this young girl was raped 50 times in less than a week.  She was not the only sex victim. Judge Moores has had 16 cases like that one in her courtroom.  She repeats: “This is evil.”   There is a shelter on the east side of Indy where the girls are taken, some with bruises and choke marks, inflicted by customers and pimps. Some bear Taser marks, punishment for breaking rules set by those who have exploited them. One girl, held in a room for days, collapsed from malnourishment as she walked into the treatment center. Many suffer from sexually transmitted diseases, passed on by the men who purchased them for sex.

Others are emotionally and mentally coerced and come to believe that their pimps are their protectors, their heroes.  Megan Jessup is chief operating officer of a Carmel-based ministry called Ascent 121.  She works with therapists, doctors, social workers and educators to provide after care.“When they come in, the girls are just exhausted.  This lifestyle wreaks havoc on their bodies. They work non-stop, and they have to be in a constant state of awareness for survival.”

In the past year, 36 trafficking victims, most from Central Indiana, were sent to IMPACT for treatment. The program works with girls ages 12 to 18, but Jessup said most are 14 to 16 years old. Ascent 121 assisted another 11 survivors of trafficking in community-based programs.

To read the entire article about cases of girls sold for sex in Indiana, click on the link below.