Freedom United: Commonwealth Must 'Commit to Ending Slavery' - FreedomUnited.org
This website uses cookies to improve your experience. We'll assume you're ok with this, but you can opt-out if you wish.Accept Read More
Skip to content
Back to Global News 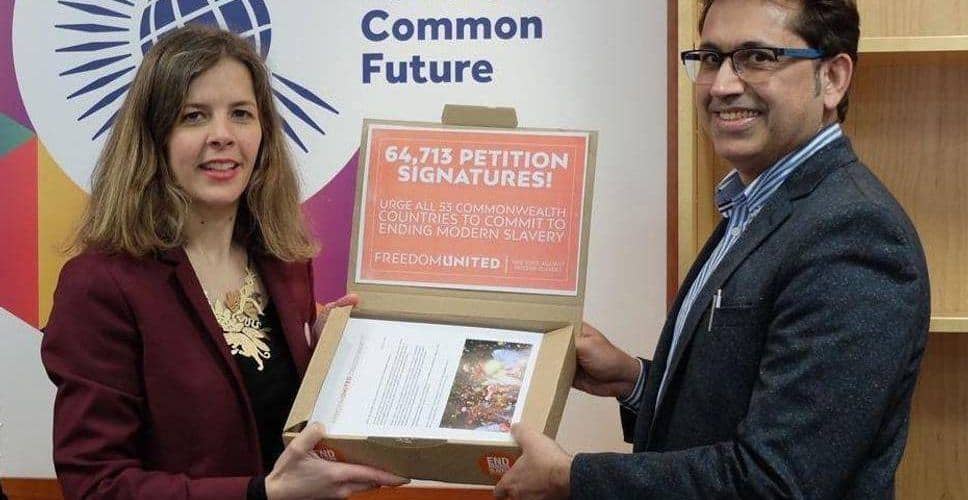 Freedom United delivered its petition with 64,713 supporter signatures calling on the Commonwealth to commit to ending slavery in all 53 member countries.

Joanna Ewart-James, executive director of Freedom United, handed over the petition to Nabeel Goheer, assistant secretary-general of the Commonwealth, ahead of this week’s Commonwealth Summit taking place at Buckingham Palace and Windsor Castle.

“We should be shocked that slavery exists on the scale it does today. Whilst the Commonwealth and slavery have a shocking history, this is an important opportunity for the Commonwealth to make history as a leading body in the anti-slavery movement,” said Bhoola

After this week’s conference, leaders from Commonwealth countries will lay down an agreement that activists hope will include a pledge to fight slavery that would bring them in line with UN Sustainable Development Goals set in 2015 to tackle the crime.

Figures from the Global Slavery Index show that 55% of today’s modern slaves are living in Commonwealth countries – even though only a third of the world’s people live in the Commonwealth.

The petition comes as the Commonwealth Human Rights Initiative (CHRI) launched its own pioneering report on modern slavery in each Commonwealth country. The report outlines several recommendations for the Commonwealth, including ratification of international laws against human trafficking and forced labor.

The Evening Standard has been working in partnership with Freedom United to combat modern slavery, launching a digital platform to take actions against slavery and partaking in a demonstration through central London.

The Commonwealth Heads of Government meeting this week is widely seen as a significant moment in the history of the organization, and it likely to be the last personally hosted by the 92-year-old Queen.

This an effective brave step from freedom united to end slavery and we look forward to do more globally.

Slavery was abolished throughout the British Empire by the Slavery Abolition Act 1833, with exceptions provided for the East India Company, Ceylon, and Saint Helena. These exceptions were eliminated in 1843.
175 years ago…it’s about time this abolition was enforced.
Anything else is aborent.