Four Ghanaian Fishers Trafficked to Northern Ireland - FreedomUnited.org
This website uses cookies to improve your experience. We'll assume you're ok with this, but you can opt-out if you wish.Accept Read More
Skip to content
Back to Global News 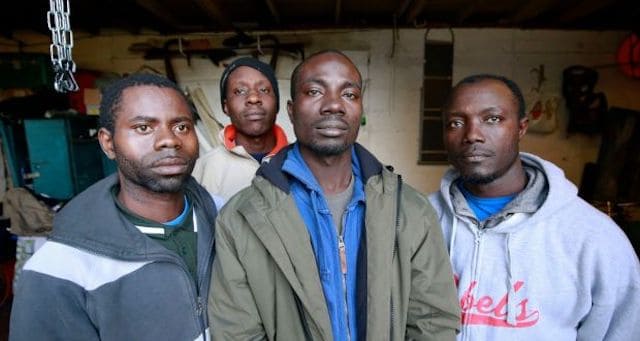 Four fishermen from Ghana who are likely victims of human trafficking are now being taken care of by the Irish police force. They are also being assisted by the International Transport Federation (ITF).

The four men, Joshua Baafi, John Ninson, Noel Adabblah, and James Effirim say they paid €1,187 (6,500 Ghanaian cedi) to an agent to secure fishing jobs in the UK. They arrived in Belfast at the end of January thinking they would be working on British trawlers.

As the Irish Times reports, all of the men had signed contracts with their employers:

They have “letters of invitation” and “guarantee” letters to work for North Coast Trawlers Ltd, a sea-food company based in Ardglass.

A mobile phone number for a “contact person”, named as Patrick Cody, is provided. The letters are signed by Alan Price, director of North Coast Trawlers, Ltd.

The men’s employment contracts say they will be paid £1,000 per month and employed for “12 months (+/- 3) upon mutual consent”. The first month’s pay is to be held by the skipper. Working hours, sick-pay and holidays are not mentioned. These are signed by the men and Alan Price.

The men say they were then forced to work 20 hour days without breaks throughout February and March. Yet this month Price told them he would have no fishing work for them for months as trawlers were being repaired and sold — in other words the men had no work and thus no pay.

But as Baafi explained, “We said we cannot work for another company because our visa was to work with him.

The men then went to ITF for help and they also have given statements to the Garda anti-human trafficking unit. If they police believe the men have sufficient evidence for a case they will be given leave to remain as witnesses, and will be allowed to work.

When asked what they want to see happen, Baafi said they just want justice.

“To go home like this, with no money – it would be a shame,” said Mr Baafi. “We want justice for what happened. We didn’t break our contract.

I am deeply sorry to hear of the appalling treatment you received and I hope you will get justice and be paid what you are owed.