Enes Kanter calls out Nike on Uyghur forced labor - FreedomUnited.org
This website uses cookies to improve your experience. We'll assume you're ok with this, but you can opt-out if you wish.Accept Read More
Skip to content
Back to Global News 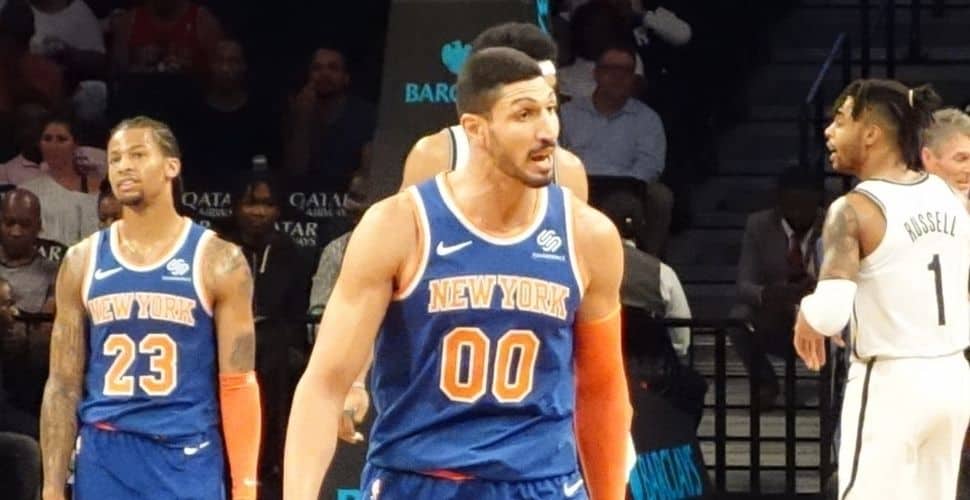 Days after calling out the Chinese government for the detention and forced labor of Uyghurs, NBA player for the Boston Celtics, Enes Kanter, dropped a video on social media accusing Nike of benefitting from Uyghur forced labor.

What is Kanter calling for?

Kanter also highlighted that Nike has not signed the Call to Action of the Coalition to End Forced Labour in the Uyghur Region. Freedom United sits on the steering committee of the Coalition which is endorsed by around 400 organizations and Uyghur groups. Our Call to Action is a brand commitment to exit the Uyghur Region and is the only methodology recognized by most Uyghur groups as sufficiently satisfying the minimum threshold for cutting ties with Uyghur forced labor.

The Boston Celtics center, who has been outspoken about the treatment of minorities in China, wore customized shoes in his team’s win against the Charlotte Hornets on Monday with the words “Modern Day Slavery” and “No More Excuses” written on them.

“There are so many forced labor factories in China. For instance, Uyghur forced labor, it is modern day slavery, and it is happening right now in China.

“Millions of Uyghurs are currently detained, sold and assigned to work at forced labor camps, prisons and factories across the country. They are under constant surveillance, with long working hours and poor living conditions.

“Don’t forget, every time you put those shoes on your feet, or you put that T-shirt on your back, there are so many tears and so much oppression and so much blood behind it all.”

The Chinese Foreign Ministry has responded to the criticism by stating that Kanter is merely “trying to get attention.” However, the broadcast of the Celtics’ season-opening game was pulled in China.

Nike has not responded to Kanter’s comments but has maintained that it is “concerned” about reports of forced labor in the Uyghur Region and is “committed to ethical and responsible manufacturing.” This is despite reportedly lobbying against the Uyghur Forced Labor Prevention Act.

With the help of our supporters, Freedom United recently wrote to top Nike shareholders to demand that they pass a resolution that would require Nike to do the absolute bare minimum of due diligence by conducting and publishing a human rights impact assessment of its entire production line. Over a quarter of Nike investors voted in favor of the proposal which is a feat in itself but not sufficient to require the assessment.

Nike is one of the fashion brands that Freedom United supporters have been writing to asking them to cut ties with the Uyghur forced labor system. Along with our partners, we also organized a protest at New York Fashion Week 2021 to call out brands like Nike which continue to profit off forced labor.

Nike can continue to proclaim zero tolerance for forced labor but, as Kanter notes, doesn’t have the receipt to prove it.

Keep the pressure on Nike and take action today.

Tibetans are with Uyghurs.