Domestic Workers Protest in Lebanon - FreedomUnited.org
This website uses cookies to improve your experience. We'll assume you're ok with this, but you can opt-out if you wish.Accept Read More
Skip to content
Back to Global News 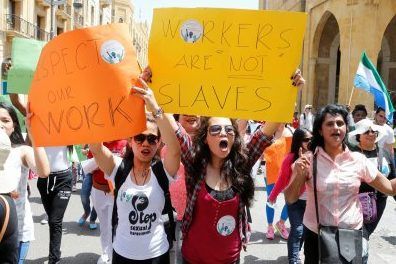 0
Hundreds of domestic workers protested in Lebanon recently to protest poor working conditions. Nearly 200,000 migrants who are mainly from the Philippines, Ethiopia, Bangladesh, Sri Lanka and Nepal are working primarily as live-in house maids…
Almost all are women and vulnerable to to being exploited due to restrictions that keep them from leaving or entering a country with the written permission of their employers. The protesters want the implementation of  the International Labour Organization’s (ILO) Convention 189 that says domestic workers are entitled to a minimum wage and have at least one day’s holiday per week.

Currently, migrant domestic workers in Lebanon are working under the kafala system – in which they are sponsored by their Lebanese employers, and may not work for anyone else – and are excluded from the country’s labour laws. There have been reports of mistreatment of migrant domestic workers including incidents of beatings, sexual abuse, withholding of passports and working long hours. Suicides and suicide attempts have been reported among the migrant domestic workers, including a maid who committed suicide through hanging herself at her employer’s apartment in Tripoli. She had been on hunger strike for three days previously, Lebanon’s Labour Ministry said, because she had not been allowed to return to Bangladesh to see her children.

The Arab world’s first labour union was set up in Lebanon in 2015.  Leticia, a Filipina who was assaulted and raped by her employer several years ago, says, “We want to be treated like human beings, like real workers. With this union, I will no longer feel alone in the face of abuse.”

The Lebanese Labour Ministry calls this union illegal.  The National Federation of Workers’ Unions in Lebanon (Fenasol), states that the country has a quarter of a million migrant domestic workers, but they do not have adequate protection or recognition from the government.  Their Labour Minister, Sejaane Azzi, said it is a fact that the law doesn’t allow foreigners to set up a union, and said that he agreed that “new laws are needed to improve the situation for housemaids”.

Human Rights Watch is also concerned that authorities in Lebanon are not renewing residence permits for children born to migrant domestic workers and are actually deporting those children. This is a practice that separates children from their mothers.

The World Cup 2022 has brought these labour abuses to the forefront, because of the unfair treatment of migrant employees as Qatar builds new facilities for the event.