Domestic workers fight back: everyday victories and stories of defiance - FreedomUnited.org
This website uses cookies to improve your experience. We'll assume you're ok with this, but you can opt-out if you wish.Accept Read More
Skip to content
Back to Global News 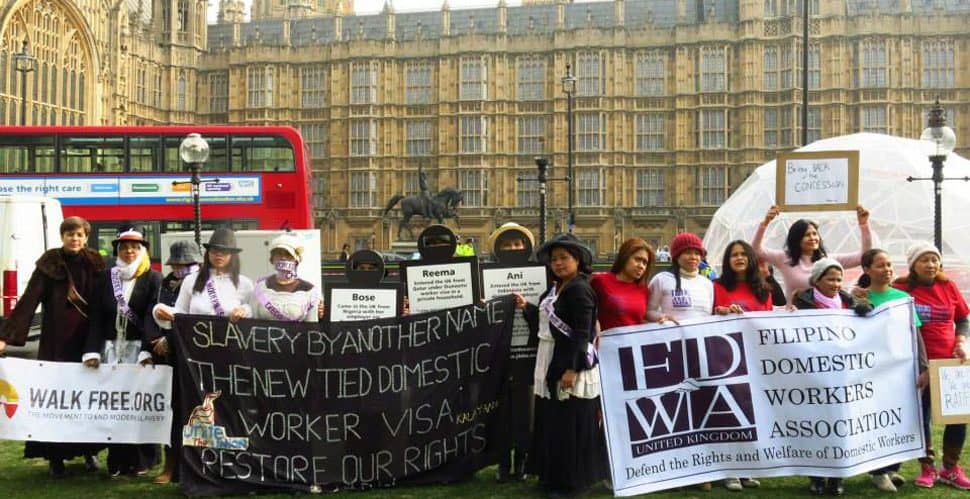 Domestic workers fight back: everyday victories and stories of defiance

In the face of overwork and wage theft, Sara, a domestic worker in Beirut, recalls how her employer demanded receipts and counted every penny when she went out to buy breakfast. But one day, Sara saved enough of her own pay to buy croissants for herself, which she relished in front of her employer, declaring  “Me too, I have the right to eat croissants!”

It may sound like a minor act of resistance to subserviency, but it helped Sara negotiate her working hours and payment. But moreover, it points to the everyday victories and acts of rebellion by domestic workers that often get lost when there is only a focus on extreme cases of abuse.

For the last two years I have joined migrant domestic workers at protests, meetings, community gatherings, and karaoke bars to learn about the everyday realities of working in private houses, far from home. As part of my research, workers such as Sara and Rose have collaborated on editing soundwalks that take listeners to places where they can hear workers’ own voices through their headphones.

Their stories complicate the simplistic narratives of victimhood and vulnerability which are too often applied to domestic workers. Accounts of abuse and escape are paired with sharp critique of immigration law and labour export policy. Vivid memories of loved ones sit alongside discussions of faith, music, and sexuality.

This range underscores the need for a more nuanced perspective, where migrant domestic workers appear – first and foremost – as experts who negotiate, defy, and survive the conditions of migration and undervalued labour. Their expertise is expressed both through everyday acts like Sara’s croissants and organised activism on an international scale. Domestic work involves far more than unfair relationships between cruel employers and vulnerable workers. One of the most pressing problems domestic workers highlight is the role of governments in stacking the deck against them.

While abusive employers are one part of the problem, governments often stack the deck against migrant domestic workers. For instance, in the UK domestic workers’ visas are tied to their employer in what activists describe as a “chattel visa.”

Unsurprisingly, this makes it nearly impossible for domestic workers in the UK — more than half of whom report verbal, physical, or sexual abuse — to challenge mistreatment when it could jeopardize their immigration status. In response, domestic workers are organizing — the Voice of Domestic Workers is currently campaigning to overturn the tied visa system in the UK.

Amara, a Filipina domestic worker who became homeless and undocumented after fleeing her abusive employers, points to another weakness in government protections. She waited for almost three years — during which she was barred from working — until the UK Home Office identified her as a victim of trafficking through the National Referral Mechanism (NRM), finally granting her leave to remain.

Amara doesn’t want to be seen as a victim of trafficking, but rather a worker. She says that exploited domestic workers are caught between being seen as a “victim or villain,” where their fate is determined by the NRM. Domestic workers who arrived in the UK from overseas have been campaigning for a change in the law so that their immigration status is no longer dependent on their employer, which makes it difficult to leave abusive situations. Freedom United supports their call, which to date, the government has not heard.

As Parry-Davies concludes, “They are unable to gain protections via the NRM until their employment situation has deteriorated to the point of enslavement – at which point they must take a leap of faith that their stories will be believed. But if their abuse is not considered extreme enough to merit protection, if they become undocumented, or if they are forced to work without papers to avoid destitution, they must either leave the UK or be treated as criminals.”