Child Soldiers of the Islamic State - FreedomUnited.org
This website uses cookies to improve your experience. We'll assume you're ok with this, but you can opt-out if you wish.Accept Read More
Skip to content
Back to Global News 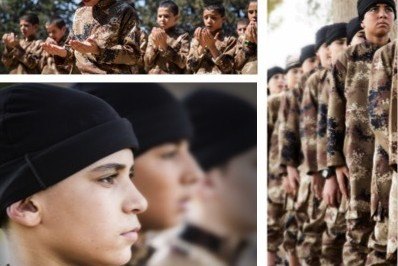 Child Soldiers of the Islamic State

The world is only starting to understand the long term effects of these child soldiers in that region.  This is not just a current atrocity, but the future will be horribly impacted, possibly for generations, carried on by these youth as they mature.

The Islamic State is building the foundation for generational conflict through the continued use of children as weapons of war. The Quilliam Foundation, with the collaboration of the Roméo Dallaire Child Soldiers Initiative and UNESCO, released its report, “The Children of the Islamic State” in the British Parliament today. The report chronicles the prolific use of children by the Islamic State. The key findings of this research are both sobering and damning.

It is estimated that in the Islamic State there are around 31,000 pregnant women. It will be the children of these mothers who become the future of the group’s army.  Schools are changing their curriculum to instill extremism and to reinforce the Islamic State’s beliefs in religion and doctrine.  These child soldiers have little sensitivity for violence and war.

The young children are called the  Cubs of the Caliphate, and they are an inspiration to others in the Islamic State to fight and go to the battlefields.

This article contends that politicians in the West are using these stories and images to create a narrative that supports military action, but then it suggests that…Beyond a social and economic issue, the use of children as weapons of war represents a distinct security dilemma. Yet as an international community we have often overlooked the security concerns the use of child soldiers present.