"Blood Bricks" of Bonded Slaves - FreedomUnited.org
Skip to content
Back to Global News 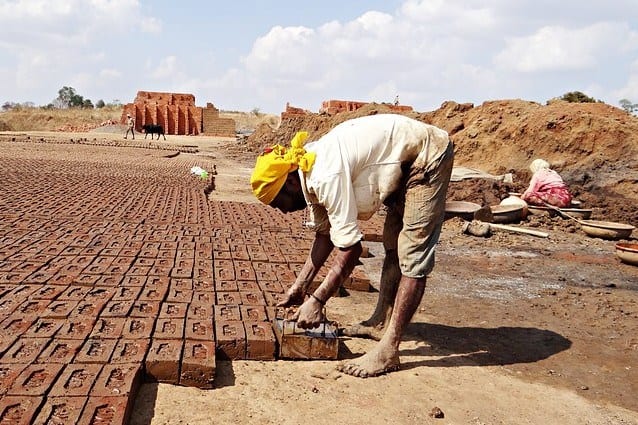 Blood bricks, made by slaves trying hopelessly to pay off debt at the many kilns in India and elsewhere, are the materials from which Indian cities are built…

Siriya was one of those slaves.  She had been tricked into bonded labor with hundreds of other immigrants who are forced to work to pay off work fees or debt inherited from family members. Siriya was rescued last week along with 563 others when police raided the kiln where she worked.  But she was confused about her future, saying, “I have two sets of clothes, two utensils and a little rice. We came with nothing, hoping to earn enough to pay back our loan. We are going back with nothing but at least the suffering will end.”  Trucks hauled them away from the shoddy, windowless dwellings on the edge of  Chennai where they had lived for months.

Thousands of slaves like Siriya are used to work in India’s construction businesses. Chadabn Kumar who started an organization called “Blood bricks said, “The scale and magnitude of the problem is massive. There are gross violations happening in many of these kilns, but the government does not have the resources or the capacity to inspect these places and check on the conditions under which workers are living, much of which amounts to modern day slavery.” Two years ago, that organization launched a campaign to expose these abuses.

The 2015 Global Slavery Index, produced by the Australia-based Walk Free Foundation estimates that nearly half of the world’s slaves reside in India.

Many Indians are duped into offering themselves for work in farms, brothels, small shops and restaurants as security against a loan they have taken or a debt inherited from a relative. This kind of exploitation is especially common in the construction sector, particularly in the unregulated areas of brick-making and stone quarrying, experts say. Yet construction is one of the most important sectors in the Indian economy, providing around 35 million jobs and contributing eight percent of the country’s GDP.

Agents go into villages and tell the poorest they will lend them $300 (20,000 rupees) which will assure them six months of employment.  Then the agent, the trafficker, sells the debt to a different agent who transports the victims by train to Chennai. One worker explained: “The agents who come to our villages spot the families in distress. They know when there has been an unforeseen expenditure and then offer the loans.  They come to us when we have hit rock bottom and have no choice but to agree to their terms.”