Child Marriage Issue in Nepal - FreedomUnited.org
Skip to content
Back to Global News 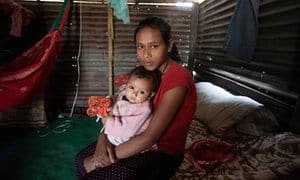 The child marriage issue in Nepal. Sajita Tamang was only 14 when she was pushed into marriage.  But she claims it had nothing to do with love…

She cried as she recalled for a reporter how she was pressured by two women in her village to meet a man out in the forest one day.  “They asked me to hang out with them. I said, ‘No, I have to make dinner and have work to do.’ But they said, ‘Come for a while.’ I didn’t want to but eventually went.” She eventually met the 20-year-old man in the forest near her home.  “He said, ‘I really like you – we should get married.’ I said I didn’t want to get married as I had a dream of opening a tailoring shop. He said, ‘I can’t wait for five years. I really like you.’ I don’t know what happened to me. I just got trapped.”

Being alone with a man is enough to ruin a girl’s reputation in the eyes of her community. Thirteen days after they married, the verbal abuse started. “My husband [came] home drunk and [said] filthy, nasty things to me,” she remembers. “He said, ‘Get out of my house.’”

An estimated 10% of girls in Nepal are married before their 15th birthday (pdf) and more than 40% before they turn 18. Nepal is among the countries with the highest rates of child marriage. Nationally, the average age a girl weds is 17.

Another example of child marriage in Nepal is Sumina Pariyar who says she fell in love when she was 15. Just seven months later, she was married.

She says, “I used to carry and break stones at the quarry and he worked there too.” She lives in a little one-room corrugated home on the outskirts of Nepal’s capital, Kathmandu.

When she turned 16, she and the man eloped. “We were working together and fell in love and got married.”  She has a small daughter, Unika.  “I was very young and didn’t know what was going to happen to me, so I just got married.”

After she’d given birth, doctors discovered Sumina, now 17, has a heart problem. This requires expensive medicine and the family has borrowed money to pay for it. They now have debts of more than 15,000 rupees (about £96). Her husband, Bhuwan, who is 18, can earn 200-300 rupees loading trucks with bricks. But the couple are two months behind on repayments.

Poverty along with the idea that girls should get married and have children drive early marriage in Napal.