'Catastrophic Failure': Trafficked Boy Sues Gov't after Sexual Assault - FreedomUnited.org
This website uses cookies to improve your experience. We'll assume you're ok with this, but you can opt-out if you wish.Accept Read More
Skip to content
Back to Global News 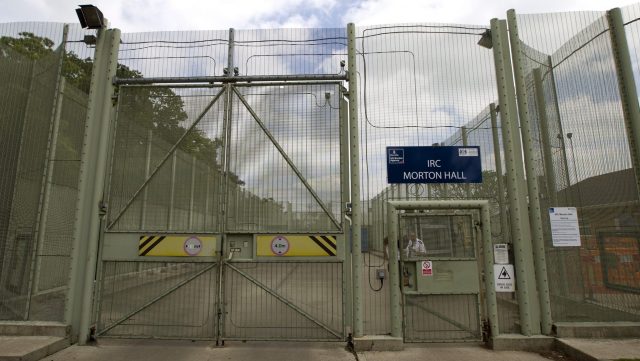 The UK government is being accused of “catastrophic failure” after admitting that a trafficked Vietnamese boy was sexually assaulted while being illegally detained.

The boy, known as “H”, is now suing the Home Office.

H was only 16-years-old when another inmate at Morton Hall immigration detention center attempted to rape him. Yet the Home Office now admits that H should never have been put in detention as he had already been identified as a potential victim of human trafficking by the government.

Incredibly, after the assault there was no investigation into the attempted rape, and H was held at Morton Hall for another six months despite the Home Office confirming that he was indeed a victim of human trafficking. The Home Office continues to try to deport H to Vietnam.

The Guardian reports on how H was trafficked to the UK:

H was trafficked from Vietnam to the UK at the age of 16 and was forced to tend cannabis plants in a house in Derbyshire. When the house was raided by police and H was found locked inside, he was charged with cannabis cultivation and eventually prosecuted and sent to a young offenders’ institution.

In a statement, H said: “My time in immigration detention was awful. After this incident, I was really paranoid that other detainees would hurt me all of the time. I felt scared all the time and I found it very difficult to sleep or eat. Morton Hall staff do not protect the detainees. Although terrible things have happened to me in the past, the effect of immigration detention made this even worse.”

Ahmed Aydeed, director at Duncan Lewis, said the assault formed part of a catastrophic failure on the behalf of the UK authorities in their duty of care to H.

H has now launched a civil action against Morton Hall based on negligence and breach of its statutory duties under the Human Rights Act for failing to launch an internal investigation or refer the incident to the police.

Duncan Lewis has also begun a judicial review against the Home Office, asking for deportation proceedings to be halted and for the Home Office to admit systemic failings in the treatment of victims of modern slavery in the UK.

H is now in a safe house for trafficking victims and has been released on bail from detention. Despite being identified as a victim of trafficking, his application for discretionary leave to remain was rejected by the Home Office. He hopes to have the decision reversed as part of the judicial review.

H told The Guardian that he is scared to be deported to Vietnam because his traffickers know where he lives and that they have threatened to harm him if he doesn’t repay the money used to send him to the UK. Yet H did not willingly go to the UK — his traffickers locked him in a room and tortured him in Ho Chi Minh, threatening to kill his family if he did not go.

“Our client’s treatment undermines the government’s rhetoric on its commitment to protecting victims of slavery and its own guidance on how child trafficking victims should be supported. Is this really how we treat those who have experienced slavery in the UK?”

What a good idea! Deport the home office

Sort this out now, do not let him suffer any more.

H’s mistreatment at the hands of the the Home Office and those responsible for his unjustifiable incarceration demands immediate attention, administration of justice and mercy.

I plead on his behalf for all of the above.