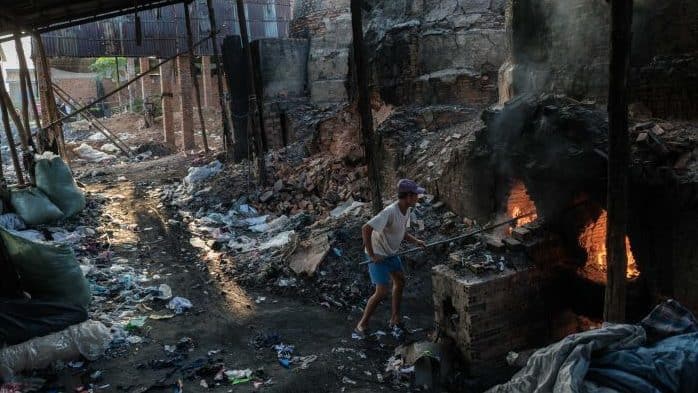 A new study from Royal Holloway at the University of London has, for the first time, made a clear connection between climate change and modern slavery in the brickmaking industry in Cambodia.

Researchers argue that farmers forced to sell off their land are becoming trapped in the brick industry, where a lifetime of debt bondage faces them and their children. They liken them to “blood bricks.”

“The impact of climate inducing [people] to migrate is something that we see across a lot of industries, but the debt bondage is something unique to the brick industry,” explained researcher Laurie Parsons.

Cambodia is one of the countries most vulnerable to climate change, with unseasonable drought and unpredictable rainfall increasingly forcing farmers to search for jobs in cities.

Dr Parsons said that transplanting — a cost-effective, traditional farming method of moving rice between fields — relied on rain falling predictably during two peaks of the year, which used to occur with regularity.

Many, burdened by spiralling microfinance debt and hounded by loan sharks, are now turning as a last resort to brick factory owners, who buy up their debts and put them to work until they can pay off the money.

The only problem is, few people ever can or do pay off the loans.

One woman, who was identified only as Achariya in the report to protect her identity, said that she was told to take over her parents’ debt when she reached adulthood.

“My debt keeps on increasing now that I have a husband and children,” she said.

The new report estimates that tens of thousands of Cambodians may be affected by the exploitative brickmaking industry.

Even though Cambodia is party to international conventions prohibiting forced and child labor, enforcing the laws in the brick industry “isn’t seen as a priority,” said Dr. Parsons.

Furthermore, kiln owners buy bricks from the head of the family — usually fathers — on a piece-rate basis, making buyers believe that they are not to blame to child labor.

“This is one of the reasons child labour is so endemic, because [kiln owners] don’t buy the bricks from the child,” Dr. Parsons explained.

“They just provide the equipment.”

Slave labor, bonded labor, debt labor are eviñ because human beings are deprived of their most basic freedoms. Greed drives such systems. Climate Change facilitates such systems. Both must be fought with high-aiming policies.

Great post!!!! Royal Holloway at the University of London has, for the first time, made a clear connection between climate change and modern slavery in the brickmaking industry in Cambodia.

This I fear is how many businesses control people these days. And children or Not, every life counts. Even adult lives. Take no lives for granted. It’s the adults that protect the children so if the adults aren’t protected, then guess what? The children will be next.

My point is, let’s not encourage businesses to operate in this lurid, disgusting manner. Let’s reteach how to be successful and operate in better ways. Let’s be innovative in a healthy way. So that EVERYONE can live happy!