Asylum Seeker Sues UK for Funding Libyan Detention Centers - FreedomUnited.org
This website uses cookies to improve your experience. We'll assume you're ok with this, but you can opt-out if you wish.Accept Read More
Skip to content
Back to Global News 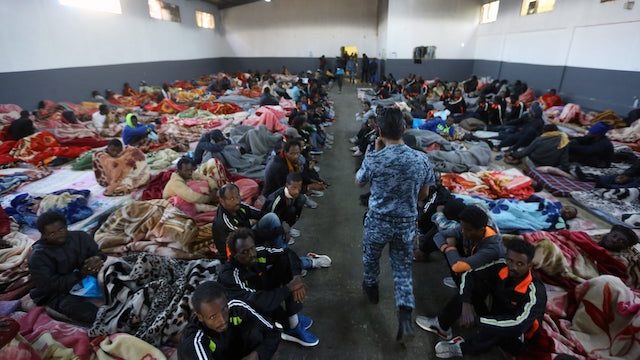 Migrants sit in a shelter at a detention center on the outskirts of the Libyan capital, Tripoli. Photograph: Mahmud Turkia/AFP/Getty Images

An Ethiopian teenager is suing the UK government over its support for Libyan detention centers, where he says he was subjected to forced labor, extortion, and physical abuse.

This marks the first time the government’s Department for International Development (DfID) has been sued for its contribution to funding Libyan detention centers.

While the EU’s Emergency Trust Fund for Africa provides some funding for the centers, DfID says that the funding it provides is used to improve conditions in the camps. Yet the Ethiopian teen at the center of this case said, “The period I was detained and enslaved in Libya was a living hell.”

The teenager who has begun the legal action against the government claims that officials are acting unlawfully in funding the detention centres and should stop doing so. He is also asking for compensation for the suffering he endured there.

The boy’s legal team is calling on DfID to facilitate the relocation of the detention centres to the UK or other safe countries so that asylum claims can be safely processed. His lawyers have asked DfID to disclose the funding agreements between the UK and Libyan governments and any internal documents concerning the destination of UK funding in Libya as well as any untoward incidents in the centres.

The teenager fled persecution in Ethiopia because of his father’s political allegiances and finally reached the UK after a dangerous journey through Libya and across the Mediterranean.

In Libya he suffered both at the hands of traffickers and in the detention centres, some of which are controlled by local militias.

The UK government maintains that these migrant detention centers are necessary to dissuade migrants from crossing the Mediterranean Sea to reach Europe. It also says the the centers are the responsibility of the Libyan authorities, though the UK says it has raised issues of conditions in the camps with Libya.

James Elliott of Wilsons Solicitors, who is representing the Ethiopian teen, said, “DfID acknowledges that conditions in the camps are appalling.”

“We are bringing this legal challenge because it is vital that UK taxpayers’ money is not used to allow places where men, women and children are subjected to torture, rape and slavery to continue to exist.”