Around the World in a Scooter for a Good Cause - FreedomUnited.org
Skip to content
Back to Global News 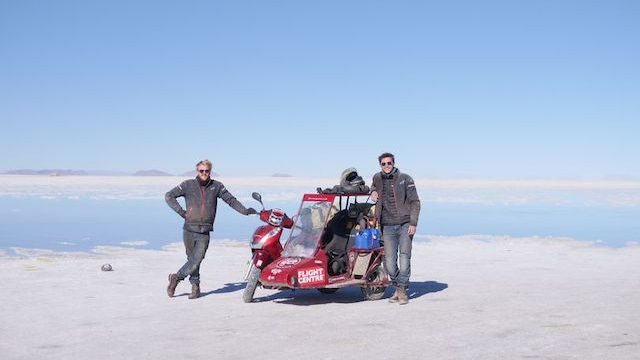 Around the World in a Scooter for a Good Cause

What can a Honda SH300 scooter and a sidecar do to improve the world?

Well, for Matt Bishop and Reece Gilkes, this was their vehicle of choice as they circumnavigated the globe, travelling a whopping 31,000 miles, on a quest to raise awareness of modern slavery.

Along the way, they visited NGOs, including Unseen UK — which runs the Modern Slavery Helpline — helping to raise money for the cause.

It’s worth noting that when they first had the idea, neither of the lads had ever even ridden bikes before.

Now, however, they have scootered across five continents, visited 28 countries and been on the road for more than 420 days.

And, if all goes to plan, the pair will ride into London’s famous Ace Cafe this Saturday (January 19) to complete their marathon journey.

They have broken the record for the longest journey by scooter and sidecar and for circumnavigating the globe on such a combo.

And they say it’s all been worth it to hear inspiring tales first-hand from those who have experienced modern-day slavery.

“With each visit, we learn of a new and awful way this issue still exists, but we always leave inspired by the resourcefulness and the tenacity of the people fighting it,” said Bishop.

One such survivor they met is Click, a Zimbabwean girl who was a child solider and later trapped in slavery when she moved to Athens.

Yet upon escaping she went on to become a successful artist, even giving a Ted talk, and now works to rescue other victims of modern slavery.

To learn more about Matt and Reece’s expedition, one can visit asseenfromthesidecar.org.