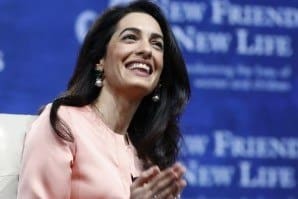 Amal Clooney, famed human rights lawyer, recently stood up for those around the world who are entrapped in slavery…

She spoke before at the annual New Friends New Life luncheon in Dallas at the Hilton Anatole. The event was sold out, aising more than $1 million which went to provide counseling, housing, and other services to 1,500 victims through several anti-trafficking organizations.

Clooney discussed international human trafficking, crimes against journalists and how her passion makes her good at her job. The conversation was moderated by WFAA-TV (Channel 8) anchor Shelly Slater. Though the conversation occasionally drifted to the topic of Clooney’s husband, actor George Clooney, she remained focused on the fact that 27 million people are enslaved throughout the world. Clooney said that if nonprofits can make a difference to just one woman, the work is worth it.

She said, “A lot I’m hearing about what New Friends New Life does is giving hope, bringing hope to them just to show you’re there,” she said. “It’s about being resilient and not giving up.”

She added, “The reason I’m doing the cases I do is because I’m emotional about them,” she said. “I don’t think a woman should apologize for that any more than a man should.”

Clooney advocates choosing a career then letting it take you where it will rather than launching out on a longterm plan.

Responding to questions, she sometimes commented about her husband, actor George Clooney.

A student, Samantha Casas, spoke before Clooney took the mic.  Casas stressed the importance of helping sex trafficking victims, saying, “Without an organization like New Friends New Life, they may never know what it means to be educated, to be loved, to be free.”

To read the entire article about Amal Clooney, click on the link below.