More than 1 in 10 Politicians in Brazil Funded by Companies 'Linked to Slavery' - FreedomUnited.org
This website uses cookies to improve your experience. We'll assume you're ok with this, but you can opt-out if you wish.Accept Read More
Skip to content
Back to Global News 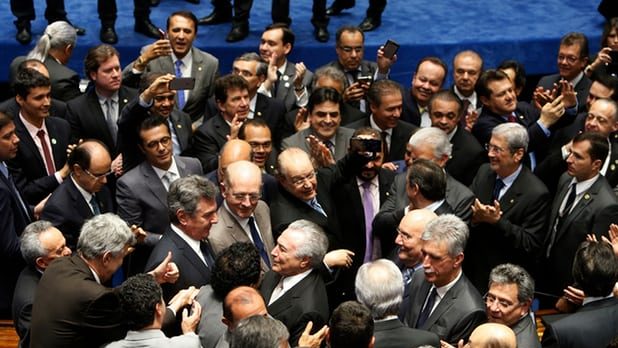 More than one in 10 of Brazil’s top ranking politicians — including President Michel Temer — has received a campaign donation from a company linked to modern slavery according to the NGO Repórter Brasil.

The Guardian reports that politicians receiving these donations are part of the rural caucus strongly opposed to anti-slavery policies:

Twenty-one of the 51 MPs who received donations from companies identified by the authorities as using slave labour are part of the extremely influential rural caucus in congress.

This lobby has continually attempted to limit efforts to combat slavery in Brazil and, late last year, supported Temer’s attempt to restrict the legal definition of modern-day slavery.

According to Brazilian law, four conditions are used to categorise “slave-like labour”: being forced to work; being obliged to work to pay off debts; degrading conditions that put workers’ health or dignity at risk; and an excessive workload that threatens workers’ health.

Repórter Brasil says it conducted its investigation by cross-checking campaign donations from the electoral court against companies that have been named on a centralized list of employers found guilty of using slave labor between 2003 and 2017.

The investigation is part of Repórter Brasil’s “Ruralometer”, a tool developed to monitor the impact of Brazilian politicians’ actions — such as campaign finance — on the environment, indigenous people, and rural workers.

“These findings are very useful for demystifying what is fuelling current attempts to backpedal on workers’ rights and anti-slavery legislation,” said Xavier Plassat, head of the Pastoral Land Commission (CPT). “The rural and construction lobbies are presenting a very strong offensive.”

Now, let’s find out how many Politicians in the U.S.A. are Funded by Companies ‘Linked to Slavery’ and/or other corrupt practices.

Que tal a “destruição dos direitos dos trabalhadores” na agenda de Temer e de seus asseclas? Alguma dúvida sobre o envolvimento da bancada ruralista? What about the destruction of all the Workers Rights in the agenda of Temer & friends? Any doubts on the role of the powerful rural and agribusiness lobby in the Congress?

It’s horrible for us in Brazil and the world. This practice damages the country and avoids the improve the life of the Brazilian people.

Well done to the Guardian for giving this publicity.
In the UK we pride ourselves on our democracy but I wonder how much time our polititicians give to big wealthy companies as opposed to charities working to improve lives or prevent deaths and injuries of ordinary people?

Corruption you will find al over the world. That makes those countries where you can find corruption a corrupt country. Brazil is trying hard to get rid of our corrupt politicians and is having success.