Going the distance to raise awareness - FreedomUnited.org
This website uses cookies to improve your experience. We'll assume you're ok with this, but you can opt-out if you wish.Accept Read More
Skip to content
Back to Global News 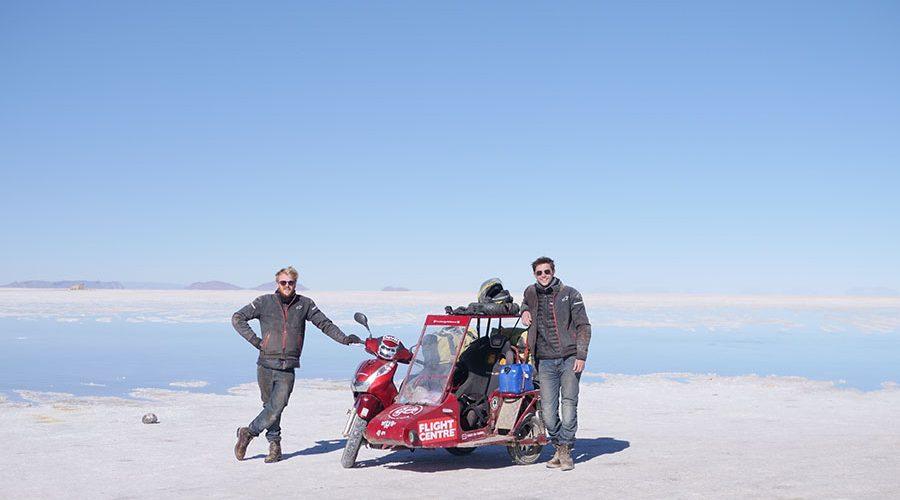 Going the distance to raise awareness

Matt and Reece, both 26, are from the UK and are circumnavigating the globe on a scooter with a sidecar. They’re going to be the first people to ever do it and 10 months in they have already quadrupled the current Guinness World Record for the longest journey by scooter and sidecar. They’re doing it to raise awareness of modern slavery and human trafficking – we met up with them to find out why…

What inspired you to start this journey?

Well, we started thinking about how the decisions we made at home affected people around the world. We had heard about sweatshops and other forms of forced labour and how we were contributing to the suffering with the things we bought. Then we realised that even though we knew we were contributing to it, we carried on shopping in the same places and making the same decisions – why? It didn’t feel real enough. We were too busy going about our normal lives. It wasn’t on the forefront of our minds. It was too far away from home.

So, we thought we needed to do something to make it real for ourselves and for everyone back home. That way our decision making would change and we would support organisations that fight slavery, not sustain it. We had no idea how to do that but we figured if we could literally drive to people who had survived modern slavery, or those who were fighting it, all round the world, then we could show how close to home the issue is.

At the same time, we figured if we could do it on the most ridiculous vehicle imaginable then more people would follow our journey and it would be super clear how close to home the issue is.

How did you learn about modern slavery?

Well, when we started planning the project we kind of knew a bit about modern slavery but we had no idea about the full extent of it. We had no idea how prevalent it is. That it is in every country on earth – including the UK – or that there are over 40 million people enslaved. That absolutely blew our minds and made us even more passionate about joining the fight against it. Now, 2 years in to our project – we’re still learning about slavery every day.

With every country we go to and with every organisation we meet, we learn about a new way or a new place that this awful human rights abuse exists.

Did you encounter instances of slavery while on your journey?

Yeah a lot. Firstly, we actively seek it out. We visit organisations that fight it and try to learn as much as we can about the situation where they are. We’ve talked to organisations all over the world including organisations Freedom United work with such as HAART Kenya.

Secondly, we talk about slavery absolutely everywhere we go. We can’t not. After finding out that we’re driving the scooter and sidecar around the world, everyone’s first questions is, “Why? We tell them it’s to raise awareness of modern slavery and then we’re immediately talking about what modern slavery is. We’ve had thousands of conversations about it, but one really stood out.

We were hanging out at a community centre in Athens, trying to meet some local people while we waited to ship the bike to Egypt, and we got chatting to a lady called Click. We told her what we were doing and she said “Oh, I was a slave once”! We couldn’t believe it.

Here we were trying to find charities to talk to about it and struggling to meet anyone, then out of nowhere she just said “Yeah, I was a slave.”

She was very happy to share her story and tries to tell people about it as much as possible to try and help others who might be living in slavery. We met her for a cup of tea the next day and she told us her life story. About how she had spent her youth as a guerrilla fighter in Zimbabwe, how her husband had been murdered and how she had been trafficked in to slavery in Greece, while looking for a better job to support her children with.

She then told us how she escaped and how she spent some time literally pulling other people out of slavery. In fact, there’s been two films made about her and she did a TEDx talk about her life not too long ago – you can read about her on our site.

But essentially, yes, if you start really looking, you can’t not encounter it. At the same time though, we must have driven past so many people who are trapped and just go completely unseen, even to those who are looking.

Matt and Reece will be doing a Facebook live Q&A about their project on our Facebook feed on Friday 31st of August. So, get your questions ready and join us for a chat! You can find out more about Matt and Reece’s crazy journey around the world by following their progress on their Facebook page or by visiting their website www.AsSeenFromTheSidecar.org.

I am a Soroptimist. Every club in the Philippines adopts a Women’s and Children’s Desk in the Police Precinct nearest to their club. We coordinate with the policewoman chief and her staff who administers this division. Cases handled are rape, incest, illegal recruitment, forced prostitution and battering of wives. We lobbied in the judiciary so that children telling their horrible stories in court are not there with reporters and photographers adding to the trauma of the child.