United Nations: end slavery in conflict - FreedomUnited.org
This website uses cookies to improve your experience. We'll assume you're ok with this, but you can opt-out if you wish.Accept Read More
Skip to content 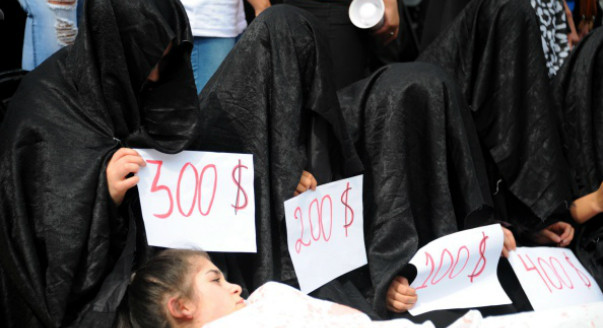 Randa, a 16 year old girl was abducted by ISIS along with her heavily-pregnant mother from northern Iraq. Forced into slavery Randa was taken and raped by a man twice her age.2

Esther Ruth Atim was kidnapped from Uganda when she was 9 years old by the Lord’s Resistance Army, a Christian militia. “Rape was on a daily basis. I was raped so I couldn’t even move … like a normal (person) … I could only move like a jumping frog.”3

Last December the UN Security Council took the first steps towards ending slavery in conflict as some members acknowledged ISIS’s use of slavery as a war crime.

We must continue to push the Security Council to protect survivors of slavery and prosecute those responsible for war crimes.

Swift action could prevent human trafficking and sexual slavery in conflicts all over the world now and forever.

The United Nations Economic and Social Council voted late last week to place Saudi Arabia on the Commission on the Status of Women for a four-year term beginning in 2018.
So UN how to take you serious anymore, when Saudi Arabia will decide about woman rights from 2018 on!
The UN is a ridiculous institution and will not do anything for wether womans nor humans rights!

Perhaps by including Saudi Arabia on such a board they are hoping to persuade them by the other members and so bring Saudis leaders up with the times. Isolating a malpracticing nation can encourage them to stay set in their ways.

I would like you to check to see if Guyana has signed on to this document and if they have not, let’s get them to do so.

This Campaign made an impact with 102,441 supporters!