Don't let the government rip up support for survivors - MP Borders Bill action - FreedomUnited.org
This website uses cookies to improve your experience. We'll assume you're ok with this, but you can opt-out if you wish.Accept Read More
Skip to content 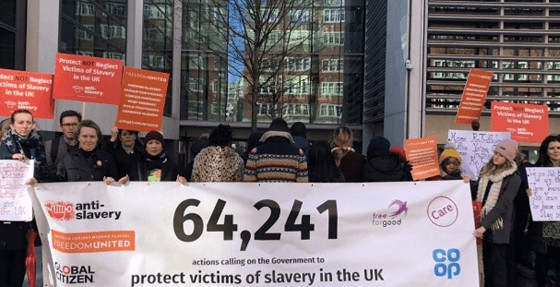 Part 5 of the Nationality and Borders Bill would have a devastating impact on survivors of modern slavery.

If passed in its current form, survivors of modern slavery, including both British and non-UK survivors and child victims, would be denied life-saving support through a cluster of new exemptions and restrictions.

Under ‘Trafficking Information Notices’ the Home Office could remove support from survivors – even when they can evidence their exploitation – if details of abuse are shared ‘too late’.1

Recovery from trauma does not follow a ‘convenient timeline’. Survivors need time to share details, as they may fear retaliation from traffickers, the risk of deportation, or the system itself due to struggles accessing a support worker or lawyer.

As well as the trauma deadline, as many as 49% of survivors are at risk of missing out because of ‘support bans’. Under Part 5, survivors with a sentence of 12 months or more (including survivors of criminal exploitation and child victims with custodial sentences) would be denied access to safe housing, counseling and support.

But parliamentarians in the U.K. have a small window of opportunity to oppose these plans. Call on your MP to raise the concerns of survivors with colleagues in the House of Lords due to debate Part 5 of the Bill, which would:

Write to your MP today and urge them to act against the repeal of hard-won rights under the Modern Slavery Act, and use whichever platforms are at their disposal to raise these concerns with Government.

As a social worker, I know sexual and trama recovery cannot be put on such time line restrictions. This is as post traumatic syndrome (PTSD), long term mental health and physical professional treatment required.These victims are scarred for life.

As many abused wives, girlfriends, women we can be this way for years so why is this any different? Abuse is abuse and I 12yrs old and was abused for 23 yrs 9 pregnancy and I finally got out, but even now 27 yrs latter it still a nightmare.

Part 5 Nationality/Borders Bill has a devastating impact on survivors of modern slavery.
If passed, survivors, including both British and non-UK survivors and child victims, would be denied life-saving support through new exemptions and restrictions. Under ‘Trafficking Information Notices’ the Home Office could remove support from survivors – even if they can evidence their exploitation – if details of abuse are shared ‘too late’. You must do whatever you can to help NOW!

Please be sympathetic to their struggles and realise recovery takes time.

This will be stopped by the people who really care about humanity.