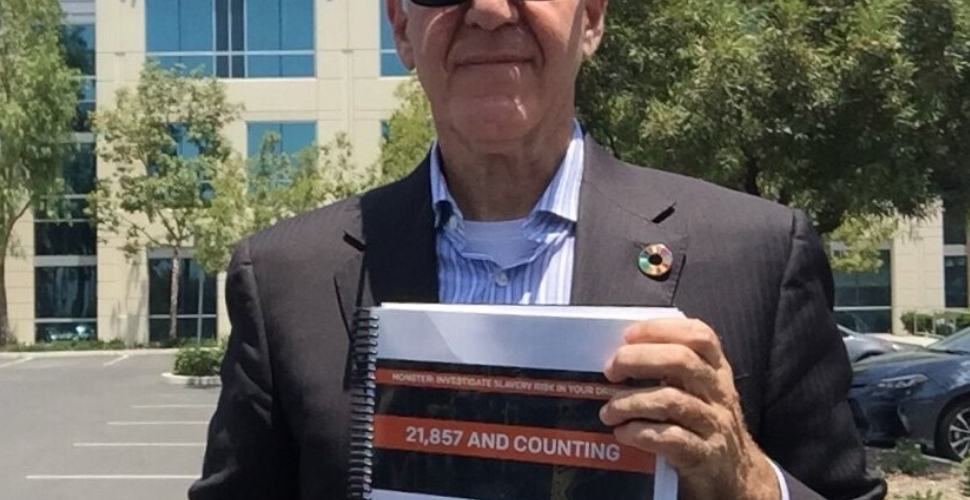 Monster Beverage Corporation, which controls 43% of the U.S.’s energy drinks market, states that there is a “minimal risk” of slavery and human trafficking in its supply chain.1 We want to know: how can this be? Forced labor and human trafficking have been identified as serious problems in six of the largest sugarcane producing countries.2

Monster scored a big fat zero out of 100 in a report on how the largest food and beverage companies are addressing forced labor3 finishing last amongst its industry peers in the soft drinks market. The company’s subsequent conclusion of “minimal risk” and reliance on suppliers’ compliance with anti-trafficking laws, does little to challenge this poor rating on transparency and action to address modern slavery risk in their supply chain.

We have an unprecedented opportunity to push Monster to acknowledge and take responsibility for its risk to slavery at their upcoming Annual General Meeting.

But we need to show there’s public support for Monster to commit resources to gathering more information and secure the passage of a resolution4 submitted by our partner organization, As You Sow. It calls on Monster to provide a detailed report showing how they assess their risk of forced labor and human trafficking by November 15, 2018.

Sign our petition to tell the CEO of Monster Beverage to investigate the slavery risk in their drinks supply chain. You can also contact their shareholders here.

As the top energy drink maker in the U.S., their commitment to action has the potential to make significant progress in helping end slavery in sugar production.

Slavery is still a big problem in the global sugar industry. Sugar, mainly produced from sugarcane, is a main ingredient in most of Monster’s energy drinks, in the form of sucrose and glucose, and it is well-documented that forced labor is known to exist in sugarcane producing countries, including Brazil, a top exporter to the U.S.5 Besides Brazil, sugarcane is also produced using forced labor in Bolivia, Burma, Dominican Republic and Pakistan.6

Reports of debt bondage in India and human trafficking risks for sugarcane workers in Guatemala have also been documented.7 In 2015, around 80% of the 170 million tons of sugar produced was made from sugarcane,8 with Brazil and India topping the list of largest sugarcane producers globally.

Aside from the U.S., Monster Beverage hasn’t disclosed the countries where it sources its sugar, or its suppliers, on whom it relies to meet laws against slavery and trafficking. The U.S. is one of the world’s largest importers of sugar, so we want Monster Beverage to give more detail when assessing its risk to forced labor and human trafficking in its supply chain – it’s crucial that they step up, investigate and report.

Following the passage of the California Transparency in Supply Chains Act9 and the UK’s Modern Slavery Act,10  Monster Beverage, as a company headquartered in California, is legally obliged to disclose its efforts in evaluating and preventing risks of slavery and human trafficking in its supply chain.

Monster Beverage says that “we do not conduct independent, unannounced supplier compliance audits because of the minimal risk of slavery and human trafficking in our supply chain”,11 an assessment that is seemingly incompatible with verified research findings on the global sugar industry. Understanding the trafficking and slavery risk in its supply chain must be the first step towards Monster Beverage taking action.

If they don’t know, how can they act? Join us in calling for Monster Beverage to accurately investigate its sugar supply chain and commit to playing its part in the fight to end modern slavery.

The rights of every person in this old world should be gauenteed till the day they leave this old world. Forced labor is barbarica but the greed for money takes precedence. This has got to stop NOW.

The sugar industry already does a disservice to humanity through addictive consumption. Now you couple this with exploiting the dignity of humans through slave-wage, there are no depths to depravity in the world. Stop drinking this vile sugar filled poison, or at least until a proper investigation is done and changes to such conditions in the supply chain work-base are made.

monster is owned by coca cola. that speaks for itself. coca cola has one of the worst labour rights records, globally. but that record has been successfully kept from the public eye, mainly by it’s use of the courts system, both in america and where ever it has been taken to court. it uses it’s wealth to drag out the process, until the victims, either run out of money, are forced to take a settlement, with non disclosure agreements. or die.

Just leave or banned all risky drink. We need to focus can we able to drink for total humanity pure nataural drinking water solution to save every single life…

No amount of profit is worth the sacrifice of a persons wellbeing. I find it unimaginable that there are people out there who have such disregard for others… oh wait, I guess That’s what we call a sociopath

This Campaign made an impact with 25,742 supporters!