Free Sajita - FreedomUnited.org
This website uses cookies to improve your experience. We'll assume you're ok with this, but you can opt-out if you wish.Accept Read More
Skip to content 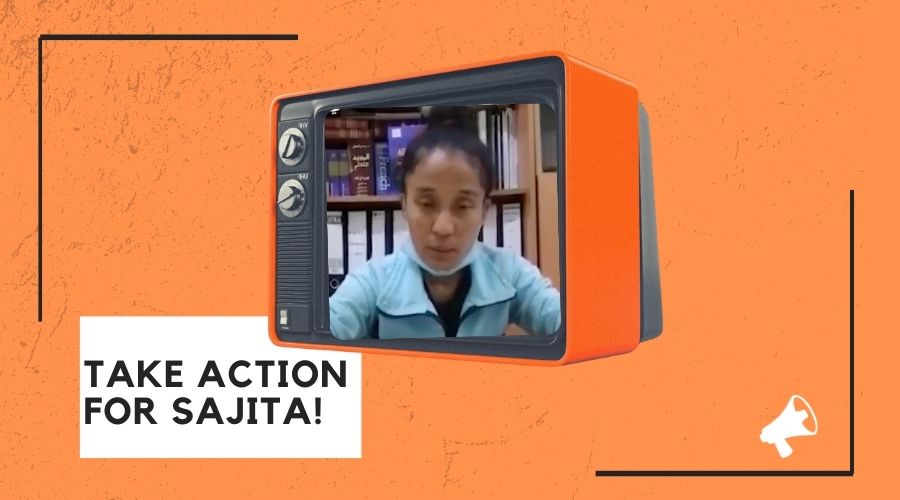 Read the petition in Arabic here.

To: Lebanon’s Minister of Labour, General Director of General Security and the President of the National Commission for Lebanese Women

We, Domestic Workers Unite and the undersigned organizations, are writing to you about the case of Ms. Sajita Lama and her decade of alleged enslavement under the kafala system.

Sajita arrived in Lebanon in 2010 to work as a domestic worker for Mr. Richard Khoury and Ms. Rana Germanos, owners of George Barber Shop. Sajita was paid for the first year and nine months of her employment. After that, all payment ceased and Sajita found herself confined to her employers’ home with her legal documents confiscated and no means of contact with the outside world.

The “Free Sajita” campaign and the joint efforts of direct action led to the police removing Sajita from the Khoury household on 24 August 2021. Sajita alleges to have suffered a decade of enslavement and post-removal still remains without her salary. Under Article 6 of the Ministry of Labour policy for Work Contract for Migrant Domestic Workers, it states “The first party [employer] should pledge to pay the second party [worker] by the end of each working month his/her full salary… without unjustified delay. The salary shall be disbursed in cash directly… in pursuance of a written receipt to be signed by both parties or… a bank transfer with a [signed] written receipt…”

After long negotiations and legal action, the Khourys have offered a settlement of a bank cheque to the value of $2,300 which equates to approximately $500, just 15 cents per day for her period of alleged enslavement breaching Article 6 of the Ministry of Labour policy.

At present Sajita remains in a safehouse where she has been for five months awaiting justice. She is owed approximately $22,000. Article 4 Universal Declaration on Human Rights (1948) and Lebanon’s obligations under Article 2 (3)(a) of the International Covenant on Civil and Political Rights, states that everyone whose rights and freedoms under the covenant are violated shall have an effective remedy, as well as of Article 2 (1) of the International Covenant on Economic, Social and Cultural Rights. Under international law, Lebanon is obligated to guarantee that those who suffer human and labor rights violations are able to access redress mechanisms and to hold those responsible accountable.

Sajita’s case has gained attention from the local and global communities who are calling for an end to the abusive kafala system. Therefore, we call on the judicial authorities to put in place a system to investigate Sajita’s case of unpaid wages and for the Khourys to fairly compensate Sajita for her decade of alleged forced labor.

On behalf of our affiliates, we the undersigned are requesting the Lebanese authorities to respect international laws of which they are signatories and ensure that Sajita is compensated and those involved are held accountable for their actions.

What happened to Sajita is absolutely heart-breaking and despicable. Why aren’t the Lebanese government taking any action to help her?

It is not at all sufficient “for the Khourys to fairly compensate Sajita for her decade of alleged forced labor.” They should go to prison!

Slavery is, unfortunately, a historical, cultural and religious reality. From the American founding fathers to Jack London South Pacific Novels, Ottoman eunuchs to Sudanese female circumcision, it has always been a part of human’s inhumanity to humans by order of a higher authority and due to ignorance, greed and sociopathic behavior.

In this day and age, there is too much financial and psychological benefit to the perpetrators to eradicate slavery all together, even in some marriages.

Sajita Lama is a former migrant domestic worker who arrived in Lebanon in 2010 and is currently residing in the country. For the first year and nine months of her employment, Sajita was paid for her domestic work in her employers’ home in Lebanon. But after that, her wages stopped. Sajita was forced to work for nine years with no pay and her employers confiscated her legal documents so she couldn’t leave. She was trapped.

Sajita managed to escape her employers’ home in August 2021 but without her wages, she is unable to return home to Nepal. That’s why we’re calling on you to support Sajita’s case, ensuring she is paid in full for her nine years of work so that she can rebuild her life.