Commonwealth Heads of Government commit to ending modern slavery - FreedomUnited.org
This website uses cookies to improve your experience. We'll assume you're ok with this, but you can opt-out if you wish.Accept Read More
Skip to content 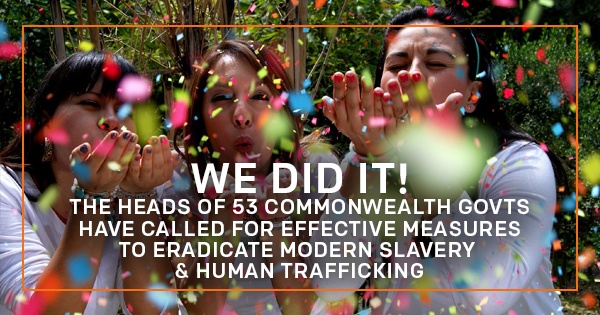 Success! In April 2018, the Commonwealth Heads of Government heard our call and finally committed to taking effective measures to end modern slavery and human trafficking. The Commonwealth’s Communiqué released at the end of the meeting said: “Heads called for effective measures to eradicate forced labour, end modern slavery and human trafficking, and secure the prohibition and elimination of the worst forms of child labour in all its forms by 2025” mirroring our call set out in our petition. We are delighted by the commitment expressed in the Communiqué and with their call to action, the potential for creating a world in which slavery no longer thrives is enormous.