Campaign win! Justice for Andy Hall - FreedomUnited.org
This website uses cookies to improve your experience. We'll assume you're ok with this, but you can opt-out if you wish.Accept Read More
Skip to content 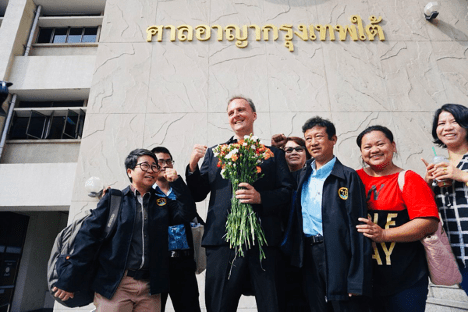 Migrant workers’ rights activist, Andy Hall, has been acquitted of criminal defamation and computer crimes filed against him by Natural Fruit Company! After seven years, justice has finally been delivered by Thailand’s Supreme Court.

137,000+ of you who signed the petition in support of Andy helped bring international attention to his case, advocate for all charges against him to be dropped, and help out with his legal defense fees. Freedom United supporters raise over $8,000 to help cover Andy Hall’s legal fees as Natural Fruit brings a case against him.

A big thank you to the Freedom United community for defending anti-slavery activists like Andy! Read about your impact here.