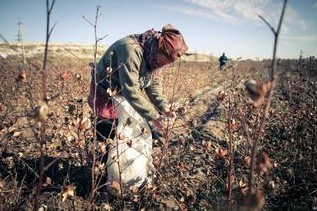 Uzbekistan’s cotton field abuses continue. A State Department Office said Uzbekistan “failed to make significant and sustained efforts” to improve its record and consequently recommended it be kept at the lowest tier of ratings…

That would allow more economic sanctions to offset it’s role in the global supply chain.  But now the U.S is downplaying the concerns and has elevated Uzbekistan from the lowest tier…saying the country is “making significant efforts.”. Is it because it needs Uzbekistan’s assistance in combating ISIS?  Activists who are working to stop the labor abuses and trafficking, such as in the cotton fields, are often persecuted.