Three Latin American Countries Struggle to End Child Slavery - FreedomUnited.org
This website uses cookies to improve your experience. We'll assume you're ok with this, but you can opt-out if you wish.Accept Read More
Skip to content
Back to Global News 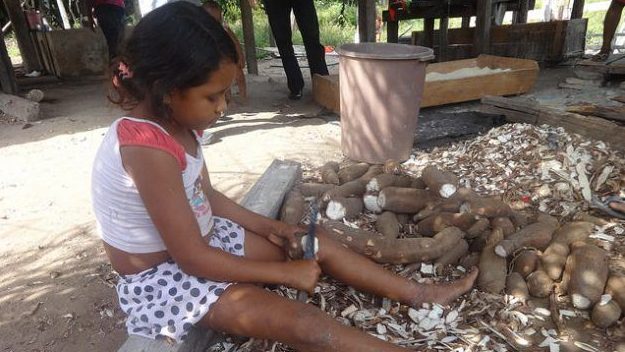 While Latin America has made great strides to eliminate child labor, there are still around 5.7 million children across the region who continue to labor, many in dangerous, unpaid work akin to modern slavery.

The majority of child laborers work in agriculture, but sectors identified as high-risk for abuse include mining, domestic labor, fireworks manufacturing, and fishing.

In particular, Paraguay, Mexico, and Brazil are three countries in Latin America where child slavery persists.

The Inter Press Service explains that in Paraguay a practice known as “criadazgo” is partly to blame:

Very poor families, usually from rural areas, are forced to give their under-age children to relatives or families who are financially better off, who take charge of their upbringing, education and food— a practice known as “criadazgo.”

“But it is not for free or out of solidarity, but in exchange for the children carrying out domestic work,” said lawyer Cecilia Gadea.

“People do not want to accept it, but it is one of the worst forms of work. It is not a solidarity-based action as people try to present it; it is a form of child labour and exploitation. It is also a kind of slavery because children are subjected to carrying out forced tasks not appropriate to their age, they are punished, and many may not even be allowed to leave the house.”

In Mexico, nearly 8.4 percent of children in the country work in some form, most in agriculture, or maquiladoras – for-export assembly plants.

Joaquín Cortez, author of the study “Modern Child Slavery: Cases of Child Labour Exploitation in the Maquiladoras”, explained the IPS that child labor is most severe in the states of Colima, Guerrero, and Puebla.

“They work in extremely precarious conditions, in addition to working more than 48 hours a week, receiving wages of between 29 and 40 dollars per week. They work in truly inhuman, overheated spaces. They are not given even the minimum safety measures, such as facemasks so they do not inhale lint from jeans, or gloves for tearing seams, which hurts their fingers,” he said.

In Brazil, a 2017 study by the Brazilian Institute of Geography and Statistics (IBGE) found that approximately 1.8 million children between the ages of five and 17 work in Brazil. However, it is important to note, as economist Flávia Vinhaes and author of the report says, child labor does not always constitute slavery. Still, among Brazilian children aged 5 to 13, 74% of them received no renumeration for their work.

“In traditional agriculture, children and adolescents perform work under the supervision of their parents as part of the socialisation process, or as a means of passing on traditionally acquired techniques from parents to children,” she said.

“This situation should not be confused with that of children who are forced to work regularly or day after day in exchange for some kind of remuneration or just to help their families, with the resulting damage to their educational and social development,” she said. “There is a fine line between helping and working in a way that is cultural and educational.”