The Team Rescuing Children Aboard India's Railways - FreedomUnited.org
This website uses cookies to improve your experience. We'll assume you're ok with this, but you can opt-out if you wish.Accept Read More
Skip to content
Back to Global News 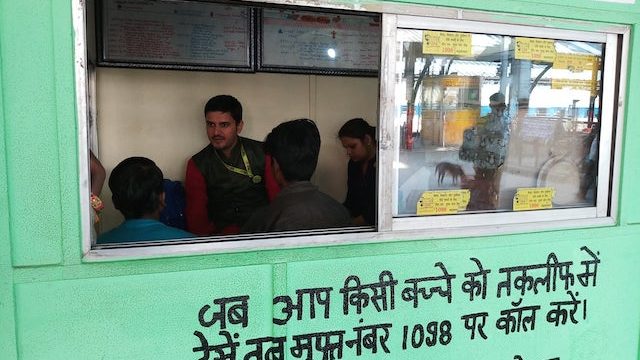 Half a million passengers pass through the Old Delhi railway station every day. This includes children who are being trafficked, shuttled across the city and the country as they are sold off for forced labor or sexual exploitation.

Yet a team from Childline India Foundation have made it their mission to rescue these children, using tips to intercept traffickers and help trafficked children passing through the rail station. They estimate that they rescue 90-100 children each month.

Success has come from a pioneering collaboration between Childline Foundation – set up under the auspices of the Ministry for Women and Child Development – and Indian Railways.

Aiming to rescue children in transit, they train railway staff to detect when something is amiss, and have posted 200,000 posters on trains and platforms for the public to report cases to the Childline Helpline. The railways even added the number to labels on packaged water bottles and disposable tea cups.

“We began training the entire railway system – the porters (who board the train as it arrives), ticket collectors, catering staff, platform staff, platform vendors, sweepers. All of them are taught to be alert, to look out for telltale signs. That’s the only way to intercept children en route, to catch them before it’s too late,” says Dr Anjaiah Pandiri, executive director of the foundation.

Railway personnel are trained to look out for children who appear distressed or confused; children dressed more shabbily than the adults accompanying them, or speaking a different dialect; children who give limited, repetitive, or evasive answers about where they are going; and any kind of mismatch between the children and the adults with them.

Neeraj Kapoor, who runs a kiosk selling books and newspapers on platform one, has dialled up his antennae. “Once you know the signs, it’s not hard to detect trafficked children. It’s just that earlier we weren’t paying attention. Earlier, I had no idea the problem was so serious,” he says.

Childline kiosks have been set up in 83 stations and are manned 24/7. Night trains are often used by traffickers in order to try an avoid detection.

Childline staff say that besides intercepting the adult, who often poses as a child’s “uncle,” much care has to be taken in interacting with children who don’t know who they can trust.

“You have to sift through the lies the children tell. The uncle has told them that he is a good guy helping the child and the parents. Then we appear on the scene as the good guys saying the uncle is a bad guy. That’s very confusing for the child. It takes days for them to trust us enough to open up,” explained Ajish from Childline.

Still, it’s clear that their efforts are making a difference.

“The response has been amazing. We get hundreds of calls a day from passengers suspicious of something,” said Heenu Singh,  regional head of Childline.

“Often we get calls from disgruntled members of the trafficking gang who weren’t paid their share and are calling to inform on the others.”

It’s great to hear success stories like this. It shows how training staff can help. Congratulations India!
There is a group here in Ireland who train hotel staff to recognise trafficked children who also have a good success rate as the staff know how to report it and make sure the children are rescued.

Now this is a positive step and one that deserves high praise, this model should be adopted in all countries,because evil men and women are adept at disguising their victims to fool authorities, simple vigilance and a will to question persons about their suspicions, after all an innocent person will not object would they?