Tainted palm oil linked to Girl Scout Cookies - FreedomUnited.org
This website uses cookies to improve your experience. We'll assume you're ok with this, but you can opt-out if you wish.Accept Read More
Skip to content
Back to Global News

Palm oil is a key ingredient in many essential items including soaps, shampoo, and primary fat in infant formula.

But the palm oil industry, which is highly concentrated in Malaysia and Indonesia, has long had strong links to forced labor, labor exploitation, and human trafficking.

The $65 billion global industry has also often been linked to child labor, with the high demand for more produce creating pressure for families to recruit their children into the labor force.

New findings from AP, which spoke to over 130 current and former workers across Malaysia and Indonesia as part of its investigation, confirm that these issues remain widespread in the industry, along with reports of sexual assault.

AP interviewed 10-year-old Ima from Indonesia as she shared that her father pulled her out of school because he needed more help to meet high company demands on the palm oil plantation he works on:

She sometimes worked 12 hours a day, wearing only flip flops and no gloves, crying when the fruit’s razor-sharp spikes bloodied her hands or when scorpions stung her fingers. The loads she carried, sometimes so heavy she would lose her footing, went to one of the very mills feeding into the supply chain of Olivia’s cookies.

“I am dreaming one day I can go back to school,” she told the AP, tears rolling down her cheeks.

“For 100 years, families have been stuck in a cycle of poverty and they know nothing else than work on a palm oil plantation,” said Kartika Manurung, who has published reports detailing labor issues on Indonesian plantations.

Ferrero, one of the companies implicated in AP’s investigation, is among the largest producers of Girl Scout Cookies, which are sold in the name of girls’ empowerment by children similar in age to Ima—but living in a vastly different reality.

Olivia Chaffin, a Girl Scout in Tennessee who is a top seller in her troop, has led calls for change from within the organization, starting a petition and writing numerous letters demanding answers.

According to estimates, an entire family on a palm oil plantation farm earns less in a day than a $5 box of Girl Scout Do-si-dos.

Neither the Girl Scouts nor their supplier and parent corporations responded to AP’s requests for comments on the findings.

Many palm oil producers are members of the Roundtable on Sustainable Palm Oil (RSPO), a non-profit organization that audits companies that conduct business with the palm oil industry, but many companies that are part of RSPO still have tainted supply-chains—including Girl Scouts of the USA.

Freedom United partner Rainforest Action Network said that the RSPO had become a way for companies to avoid scrutiny.

“The RSPO promises sustainable palm oil. But it doesn’t mean that that palm oil is free of child labor or other abuses,” said Robin Averbeck of the Rainforest Action Network, a San Francisco-based nonprofit that has found pervasive problems on plantations, including those certified as sustainable. “It has simply become a tool for greenwashing.”

The Freedom United community has been vocal about forced labor in the palm oil industry, with over 127,000 signing a petition calling on the U.S. to block palm oil from FGV, a palm oil giant repeatedly accused of forced labor.

In September this year, US Customs and Border Protection (CBP) finally complied with our demands; along with our partners, we continue to monitor the status of the ban, which is being strongly contested by FGV.

Learn more about the campaign in our field report. 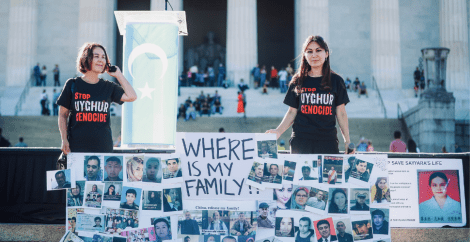