Suu Kyi Visits Thailand - FreedomUnited.org
This website uses cookies to improve your experience. We'll assume you're ok with this, but you can opt-out if you wish.Accept Read More
Skip to content
Back to Global News
Thursday June 23, 2016

Suu Kyi visits Thailand today.  She is expected to get a warm welcome by admirers and thousands of whom have sought work and sanctuary from war across the border…

She has renewed the hopes for a new era of prosperity that may convince the army of low-paid Myanmar labourers in Thailand to go home. 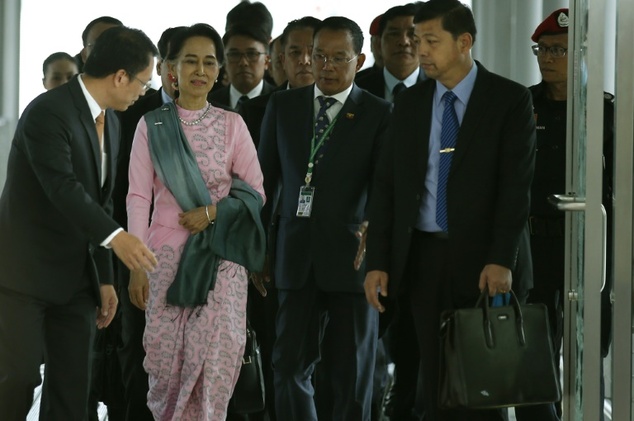 The two Southeast Asian neighbours have gone in different directions in the last few years.

While Myanmar’s junta has rolled back its chokehold on politics, last year allowing the freest elections in decades, Thailand remains in the grip of a military that seized power in 2014. As Myanmar’s democracy champion, Suu Kyi will receive a rock star welcome during a visit to a fishing village in Samut Sakhon later Thursday. Hundreds of migrant workers — most wearing Suu Kyi T-shirts — gathered at a market in the port town just outside Bangkok, awaiting the arrival of their heroine on Thursday afternoon.

One migrant named Thon, a 50-years-old, said her visit brings hope. Thon is a migrant worker in the port that is the seat of Thailand’s huge seafood industry where a 100,000 low-paid Myanmar labourers are employed. “We have problems here in Thailand. She might help us with labour rights… people all around the world will listen to her.”

The fishing sector is a hotbed for the use of slave labor and the  abuse of workers. The scandals have led to the threat of sanctions by the European Union — a key market for the multi-billion-dollar Thai seafood industry.

These workers–around a million–hoping to leave poverty at home, register as Myanmar workers in Thailand.  Other estimates, including those working illegally, put the number at 3 million.

Rights groups explain:  Migrants–legal and otherwise–are vulnerable to unscrupulous officials, trafficking gangs and employment agencies who charge huge sums to get them poorly paid work. Their low status also sees them treated with scorn and mistrust by many Thais.

Andy Hall, a migrant rights activist says, “They all want to go home, but they are just waiting for the economic situation (in Myanmar) to improve significantly.”

Suu Kyi continues to control her government’s messaging.  She is 71 years old and is Myanmar’s foreign minister and state counsellor, but also the de facto leader of her country despite a military-era constitution that bars her from the presidency.