The Price of 'Green' Electric Cars and Smartphone Batteries? Child Labor. - FreedomUnited.org
This website uses cookies to improve your experience. We'll assume you're ok with this, but you can opt-out if you wish.Accept Read More
Skip to content
Back to Global News 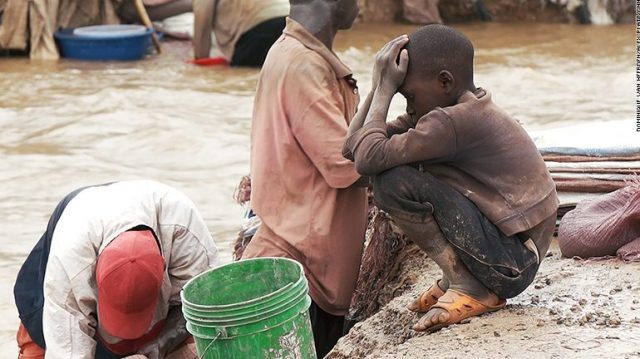 An investigation by CNN has uncovered that children are working at cobalt mines in the Democratic Republic of Congo (DRC). They labor at the very bottom of the global cobalt supply chain as electric carmakers and big tech companies scramble to get more and more of the precious mineral.

Why? Because cobalt is a key component in lithium-ion batteries.

The Democratic Republic of Congo produces around two-thirds of the world’s cobalt and is estimated to have half of the world’s reserves. In the last two years, rising demand has seen the price of cobalt quadruple, and production at artisanal mines — long-known to have child laborers — shot up by 18%.

As CNN found, it isn’t easy for companies to avoid using cobalt from these smaller mines. Dealers at markets in the DRC were filmed buying cobalt without verifying its source and mining method. They then send it for processing where it is mixed with cobalt from other mines before ending up in batteries that power devices around the world.

BMW, Volkswagen, and Mercedes-owner Daimler acknowledged how difficult it is to verify the source.

BMW said it makes “every effort to ensure the highest possible standards in the labor practices of our suppliers” but admitted it could do more.

Apple (AAPL), which stopped sourcing from artisanal mines last year, is also reported to be in talks to buy cobalt directly from regulated mines in the DRC. It declined to comment on those reports.

Volkswagen — which has plans to launch dozens of new electric cars — has introduced new rules for all its suppliers to ensure there’s no child labor in the supply chain.

Samsung, Tesla, and GM all made similar statements saying that they have policies against child labor in their supply chains.

Notably, about half of the world’s cobalt passes through China at some point in the supply chain. Chinese mining group Huayou, the parent company of Congo Dongfang International Mining, was accused in 2016 by Amnesty International of sourcing from artisanal mines rife with child labor.

The company claims it has suspended buying from artisanal mines, but CNN’s investigation found a truck from Congo Dongfang International Mining leaving from the very market where cobalt mined by children was sold.

Richard Muyej, governor of Lualaba Province in the south of the DRC, told CNN that he believes some improvements have been made at cobalt mines.

Still, he is frustrated that giant companies reap huge profits while his country remains quite poor. He said Apple and Samsung are some of the region’s biggest cobalt consumers, but he has never met with representatives from either of these companies.

“If [these multinational firms] have the correct intention to work with us on traceability in a proper manner, they should come and see us,” he said.

How about a campaign to put pressure on Samsung and Apple? I’m a long-time Apple user and the company has ambitious standards to combat their contribution to global warming and support workers’ rights. The global warming aim seems to be going well but the second less so. Samsung has signed up to the UN’s sustainable development goals. Both can be persuaded to do more more by their vast user base.

While we are self-righteously busy trying to avoid products of child labor, ¿what are we doing to assure that those same children will have something to eat, somewhere to sleep, if we force companies to close out their jobs? Who is dealing with this in a “whole-systems” way?

Eve – You may want to check out Day 10: Tracing Transparency in Supply Chains from our recent Freedom Fortnight event. There is a very good video that discusses the need for a “big picture” approach from consumers, using our buying power to influence corporations to do better.

We should start a campaign to stop companies using children as slave Labour. Have these people got children of their own? Would they like them to have a life like these poor innocent children?

Unconscionable! Interesting to see how we in the so-called first world, even those involved in so-called “green” activities, indirectly support such a travesty.

Criticism of the ‘Green Movement’ which is essentially about the planet’s futures pointless. It is for firms involved and Governments of both importing and exporting countries to sort this out. Child labour only exists because firms can get away with paying less than for adult labour, stringent laws demanding children are in school help. Firms need to be required to show the route of any product item and from where it is sourced. Rich nations need to pay a fair price for the resources they take.

God is not mocked. We reap what we sow.