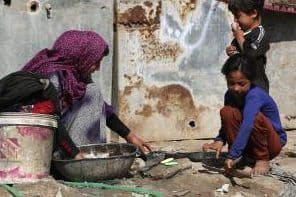 Iraqi child brides have little future ahead of them.  According to aid workers, many parents think their children will be less vulnerable to assault and violence if they are married…

Aziza shows a photo on her mobile phone of her 14-year-old daughter, Layla.  She is dressed in a pink satin dress and smiling into the camera.

Aziza explains, “This was her engagement party. (Her fiance) was 22 years old. His family came to us at various times to ask for our daughter. The third time we accepted.”

It took some convincing by the two sets of parents to encourage them to go through with the wedding, but once they agreed, the preparations began.  Layla had other suitors, but her parents turned them down when they lived in Mosul.  But they all had to flee when the Islamic State captured the city in 2014.

Now Aziza, her husband, and six children live in shelters in Iraq’s northern Kurdish region where 1 million Iraqis (IDPs) live in camps. “I refused in Mosul because I didn’t want her to get married until after school. Here in the camp she was pushed to accept.” (The mother and daughter’s names have been changed to protect them.)

Aziza was only 10 when she married her husband.  Fear and uncertainty about this war-torn region is making child marriage more common because parents see it as a way to protect their daughters.

Worldwide, more than 700 million women were married before their 18th birthday, according to a 2014 UNICEF report. More than one in three of them were married before the age of 15. While the minimum age of marriage in Iraq is 18 – 15 years with parental consent – UN statistics show that almost one in five women marry before they are 18. Early marriage not only deprives girls of education and opportunities but increases the risk of death or childbirth injuries if they have babies before their bodies are ready.

When daughters marry, they become the responsibility of the groom and his family.

To read the entire article about Iraqi child brides, click on the link below.