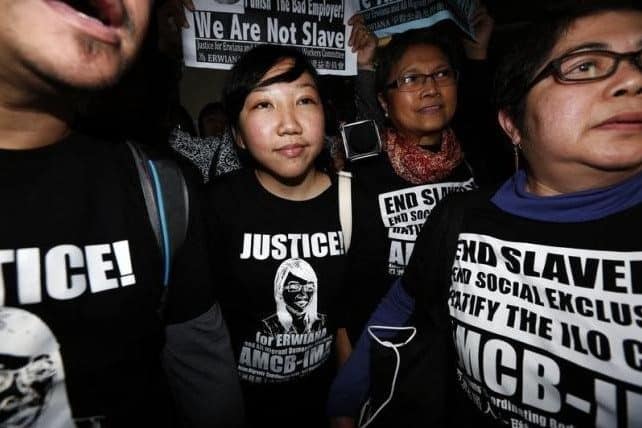 Hong Kong is causing a human trafficking concern: 1/6 of their domestic workers are victims of forced labor…

This article explains that one in every six migrant domestic workers in Hong Kong is a victim of forced labor.  Activists on Tuesday asked for more protection for maids.

Research by the Justice Centre Hong Kong suggests more than 80 percent of the territory’s 336,600 domestic workers are exploited, with some working 20 hours a day. “Hong Kong must come clean; the government can no longer afford to simply sweep these problems under the carpet,” the center said in a report.

This issue is made international headlines this past year when a mother who abused her maids was sent to prison for six years.  In 2013, a couple there tortured their domestic worker, tying her to a chair and leaving for a vacation.  The government may refer to such cases as isolated situations, but activists say they are symptomatic and widespread.

A study surveyed more than 1,000 domestic workers and reported:  “Migrant domestic workers are uniquely vulnerable to forced labor because the nature of their occupation can blur work-life boundaries and isolate them behind closed doors.”

The Justice Centre suggested that maids required to “live in” are more likely to be exploited.  They urged more clear guidelines regarding hours. Because there is a rule that calls for workers to leave the country within two weeks of their contract ending, workers are reluctant to report abuse.

A third of those surveyed for the report were not given a full day off as the law requires.  And the Center wants to see the end of unscrupulous agencies that overcharge maids, leaving them in debt.

[Credit for this article goes to the Thomson Reuters Foundation.]  To read the entire article, click on the link below.