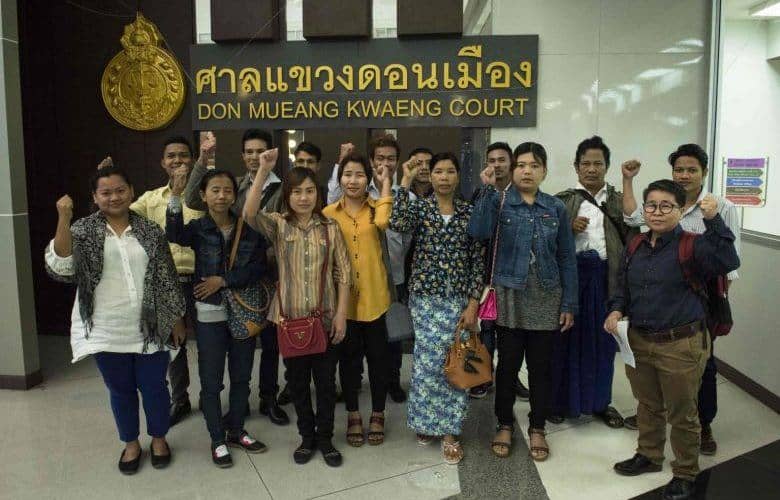 The defamation trial of 14 migrant workers from Myanmar who spoke out about labor abuses on a Thai poultry farm began this Wednesday in Bangkok. Observers say this case is an effort to silence whistleblowers.

The migrant workers went to the national human rights commission back in 2016 to file a complaint against Thammakaset, the company that owns the poultry farm they worked at in Lopburi province. They reported that they were subjected to harsh living conditions and labor exploitation.

Thammakaset, in retaliation, sued the workers for criminal defamation and giving false information to public officials — crimes that carry jail terms of up to 1.5 years.

The labourers said they were forced to work gruelling 20 hour days without compensation for overtime among other abuses on the farm owned by Thammakaset, a company that supplied meat to the Thai food conglomerate Betagro.

Betagro, a food giant that sells to clients around the globe, later cut ties with the supplier farm.

“The workers just filed a complaint because they thought their rights were violated and asked for an independent body to investigate,” defence lawyer Nakhon Chomphuchat told AFP ahead of the hearing.

“This case shouldn’t happen,” he added.

Millions of migrant workers come to Thailand from neighboring countries — primarily Myanmar — to work aboard fishing vessels and in farms and factories.

Thailand does not allow migrant workers to form trade unions, however, and those who do speak out against abuses are often fired or prosecuted under defamation laws.

Human rights groups said this was a clear case of employers retaliating against workers who spoke up.

“These types of cases are all too common in Thailand. They’re a mark of the high costs paid by whistle-blowers and truth-tellers for simply exercising their right,” said Amy Smith from Fortify Rights.

You companies are so stupid, launching a defamation case against them. You are hypocrites treating them badly and then suing them for doing the right thing. We will never buy meat from you ever.

May the Lord God watch over them and protect them.It is shameful that slavery still exists.

Thailands ruling Govt should sort their worker rights & conditions out, it is presently disgraceful & reflects to the tourists as poor. They do not want to see this happening to the local population & could reflect on others visiting your country which could be bad for Thailand – ” BE FAIR “

Bullying by sound of it and infringement of human rights and justice? People should all have free speech, if it isn’t true then people have nothing to worry about.

I learned that Thailand is a lovely country to goon holiday for us Europeans, but for workers it is is a crime. We should help the whistleblower and truth-tellers to get their rights!