Brick Layers Rescued from Trafficking - FreedomUnited.org
This website uses cookies to improve your experience. We'll assume you're ok with this, but you can opt-out if you wish.Accept Read More
Skip to content
Back to Global News 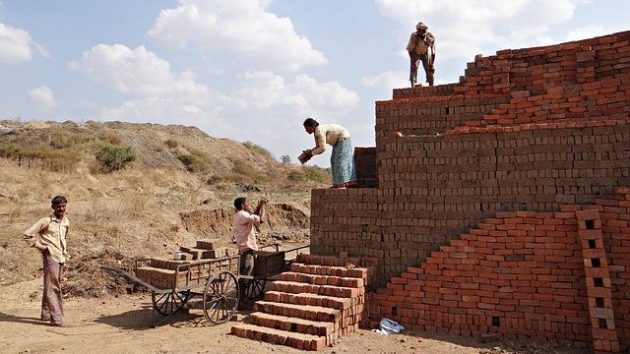 Brick layers were rescued from a construction site in Karnatake, according to police on Monday.

The labourers, all from the tribal areas of neighbouring state of Telangana, were building a road between the towns of Nipani and Mudhol when they were rescued by Karnataka police on Saturday.

A revenue department offical said, “It is a clear case of (debt) bondage.  Their statements have been recorded and we are now in the process of issuing release certificates to the workers. They will then be sent back home in a day or two.”

The trafficker suspected of the offense and the contractor of the project have been arrested under trafficking and bonded labour abolition laws.

Activists are pleased and said that the rescue is one in a series showing the magnitude of debt bondage across India, the most prevalent form of forced labour in a country where an estimated 18 million people live in some form of modern slavery, according to the latest Global Slavery Index by the Walk Free Foundation.

P.H. Vasudev Rao from Foundation for Sustainable Development, explained, “In one instance, a worker had taken as little as 500 rupees ($7) as loan and had been working in terrible conditions for three months. It has taken us six months to help these workers. The contractor would keep moving them to various project sites in the region. We finally caught up with them now, in Chikodi, and discovered that there were at least six people who had been in bondage for two years.”

Officials said that they had also recorded at least two cases of sexual abuse and two infants were among those rescued.

In one of the statements, a worker described how he was not allowed to go home when his mother died.

“The trafficker just gave him 100 rupees ($1) and said he should do the ceremonies at the work site. His mother’s last rites were done by relatives back home,” said Rao, who was also part of the rescue team along with a police anti-trafficking unit.

“The man was inconsolable when we rescued him.”