Bangladeshi Photos of Child Bride - FreedomUnited.org
This website uses cookies to improve your experience. We'll assume you're ok with this, but you can opt-out if you wish.Accept Read More
Skip to content
Back to Global News 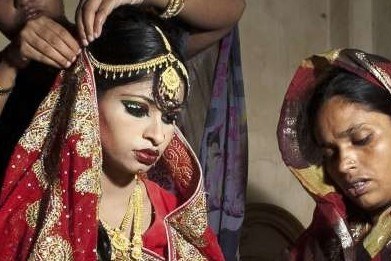 Bangladeshi photos of a child bride by photojournalist Allison Joyce is the focus of this article. She was working for Getty Images in Bangladesh when she noticed wedding preparations in a large tent.  Out of curiosity, she asked about it and learned that the wedding–scheduled for the next day–was for a bride who was 15 and a husband 32…

Her photos are compelling and disturbing.  Joyce said,  “She didn’t seem like she was under any misconceptions about what was happening to her. She was quiet and withdrawn the entire day, even when surrounded by her friends. In a lot of ways, it felt familiar, like the weddings I attended in the U.S.: Guests were dressed to the nines; happy couples mingled around; children were dancing in the streets to pop music. Everyone was celebrating this forced marriage of a 15-year-old girl to a 32-year-old man. To most of them, the sight wasn’t an unusual one. Most of the women in these communities are also married around the same age or younger.”

Bangladesh has one of the highest incidences of child marriage in the world–65% marry before turning 18–though the practice was outlawed there in 1929.  It is also a concern in other countries.  For example, in America,  children can get married before the age of 18 with parental consent.

Child marriage is incredibly harmful for girls — threatening both their health and education. Most young brides must drop out of school after their wedding, and many suffer violence and sexual abuse at the hands of their often much-older husbands. Early pregnancy puts girls at a higher risk for complications and death during childbirth, according to nonprofit Girls Not Brides.

Joyce hopes that her photos will raise awareness and inspire advocates to push for change.  “Photography is a universal language and an incredibly powerful tool to affect change. It’s one thing to read the statistics and know that things like child marriage are happening somewhere in the world, but seeing the frightened face of a child on her wedding day, personally that’s what moves me, and I think most people, the most.”

To see the Bangladeshi photos and read the article, click on the link below.

[Editor’s note: Captions were provided by Joyce and have been edited for length and clarity.]